Duterte off to Tokyo to meet Emperor, Abe 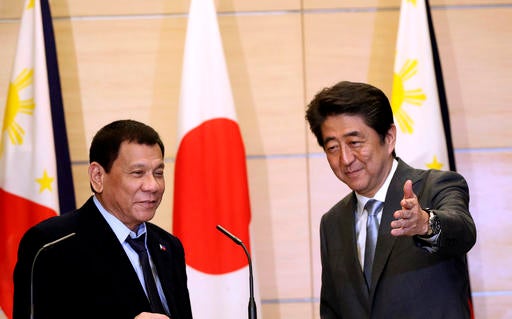 President Duterte is expected to meet the Japanese Emperor and Empress next week, after his visit to the Imperial Palace was canceled during his state visit to Japan last year.

Mr. Duterte was scheduled to have an audience with Emperor Akihito and Empress Michiko on Oct. 31 at the end of his three-day official visit. He will leave for Tokyo today.

The Emperor’s family was in mourning following the death of his uncle, Prince Mikasa, prompting the cancellation of Mr. Duterte’s visit to the Imperial Palace during his trip last year.

His scheduled audience with the Emperor last year had generated some concern among the Japanese, who were worried that Mr. Duterte, who tends to be informal and irreverent, might cause an embarassment.

Mr. Duterte, however, has largely been diplomatic with foreign leaders during his many trips abroad. He stuck to written speeches and reined in his penchant for using street language and blurting out cuss words when he hosted the leaders of the Association of Southeast Asian Nations last April.

Also on the President’s schedule is a meeting with descendants of the late Japanese Prime Minister Takeo Fukuda, who expounded a foreign policy doctrine in a speech during a 1977 visit to Manila where he pledged that Japan would not be a military power and instead build a “heart-to-heart” relationship with Southeast Asia, which the Japanese occupied during World War II.

Mr. Duterte will posthumously confer on Fukuda the Order of Sikatuna, a diplomatic merit bestowed upon individuals who have given exceptional and meritorious services to the Philippines or who have fostered strong foreign ties.

Mr. Duterte will also witness the signing of business letters of intent and meet with Foreign Minister Taro Kono.

The President and Prime Minister Abe will hold talks on key regional issues. Abe will also host a dinner for Mr. Duterte.

Japan is one of the Philippines’ biggest sources of official development assistance.

In January, during a visit to Malacañang, Abe announced a 1-trillion yen (about P453.3 billion) aid package over the next five years for the economic and infrastructure development of the Philippines.

Abe and Mr. Duterte also have struck a close friendship. The Prime Minister flew to the President’s hometown during his trip to the Philippines and was a breakfast guest at Mr. Duterte’s home in Davao City.