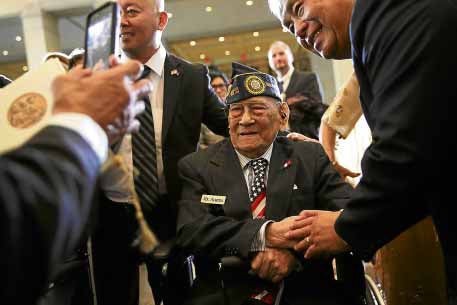 AWARDING RITES Celestino Almeda, a 100-year-old veteran who represents the Philippine Commonwealth Army, is greeted by guests during the Congressional Gold Medal presentation ceremony at the US Capitol Visitor Center in Washington. —AFP

WASHINGTON—Celestino Almeda joined the Philippine Commonwealth Army in 1941, fought alongside US soldiers during World War II and for nearly a decade had been seeking money the federal government had promised.

On Wednesday, the 100-year-old veteran got his recognition and finally his money, too.

Almeda received the Congressional Gold Medal, the nation’s highest civilian honor. Veterans Affairs Secretary David Shulkin also announced at a Capitol ceremony that Almeda was getting a check, 72 years after the war ended.

Shulkin’s announcement drew gasps from some of the hundreds in attendance at the Gold Medal ceremony, which House Speaker Paul Ryan acknowledged was “long, long overdue.”

Almeda, wearing his military cap, told the crowd he was glad to be able to accept the medal, noting that “many have passed away waiting for 75 years for this time to come.”

Almeda said he and other Filipino veterans had long “felt unrecognized for fighting for our country.”

“I wondered why” since he and his fellow soldiers had brought “victory during a long war in the Philippines,” he added.

The gold medal signified that his service  and that of thousands of other Filipino veterans is recognized, Almeda said, calling himself a warrior who “will never quit.”

In Manila,  Foreign Secretary Alan Peter Cayetano welcomed “this important gesture by the US Congress to pay tribute to the gallantry and sacrifices” of Filipinos who fought alongside their American brothers-in-arms.

“We are heartened to know that after more than 70 years, Filipino veterans were finally given the honor that they very much deserve,” Cayetano said in a statement.

“The Congressional Gold Medal affirms and celebrates the stories of our two great nations that have been brought together by the shared sacrifices of our soldiers in wartime and the shared commitment to freedom and democracy of the Filipino and American peoples during peacetime,” he said.

Almeda was a 24-year-old teacher when he joined the Philippine Commonwealth Army in 1941. After the war, he resumed his career as a teacher

and was granted US citizenship in the 1990s. In 2003, he began receiving medical benefits from the Department of Veterans Affairs under a law aimed at Filipino veterans.

But Almeda, who lives outside Washington, has been fighting for nearly a decade to receive a $15,000 lump-sum payment promised to Filipino veterans under the 2009 economic stimulus law.

Almeda was among more than 250,000 Filipino soldiers who served alongside US soldiers in World War II, including more than 57,000 who died. After the war ended, President Harry S. Truman signed laws that stripped away promises of benefits and citizenship for Filipino veterans.

Only recently have the veterans won back some concessions and acknowledgment, including the gold medal.

Ryan said the Capitol ceremony was more than “a feel-good story of delayed recognition. We are here to immortalize the legacy of great liberators, who have paved the way for generations to follow.”

The ceremony  and the gold medals  should “serve to ensure that those who fought for freedom are never forgotten, and always remembered,” Ryan said.

Sen. Mazie Hirono said Filipino veterans enlisted for World War II “knowing full well that the enemy could discover who they were and retaliate against their families.”

Even after their service “was practically erased from American records … these veterans never gave up,” Hirono said. “They organized and fought for what they had earned.”

In 1990, Congress awarded US citizenship to thousands of Filipino veterans and later extended Veterans Affairs benefits to them. The 2009 stimulus law authorized the lump-sum payments, although in some cases missing or poor records blocked the payments from being made.

“After bravely serving our country, it is frankly shameful that these veterans had to fight so hard for what they were promised,” Hirono said.

“We are living in tumultuous times, and we have many disagreements,” Hirono said, “but we agree that it is our responsibility as public servants and Americans to honor each veteran in the same way they honored our country.” —REPORTS FROM AP AND DONA Z. PAZZIBUGAN