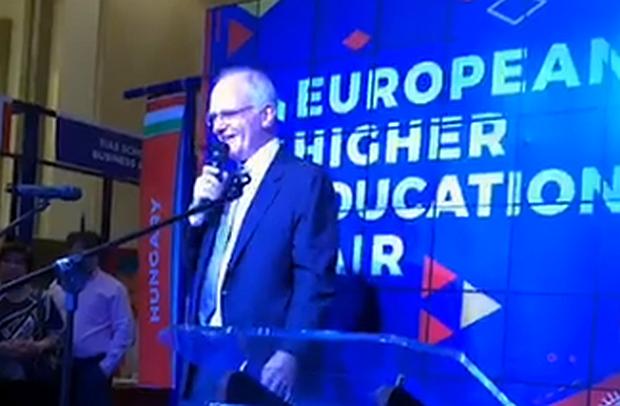 EU Ambassador Franz Jessen speaks at the opening of the European Higher Education Fair on Wednesday, Oct. 18, 2017, at the Edsa Shangri-la Plaza in Mandaluyong. (Photo from a video posted at the EHEF Facebook account)

In spite of the threats and insults it has received from President Duterte and his officials, the European Union (EU) could still give the Philippines as much as 100 million euros, or around P6.1 billion, worth of grants for Mindanao, especially for the rehabilitation of war-torn Marawi City.

EU Ambassador Franz Jessen told reporters on Thursday a “government-to-government” arrangement would be needed to ensure the aid flow’s success and the timeline for the release of the grants would depend on the progress of the talks between the EU and Manila.

“Right now, we’re discussing internally in the EU. We are talking about 55 million euros which, later on, we intend—if things go well—to expand to a total of around 100 million euros for Mindanao and Marawi. It’s for Mindanao with a special focus on Marawi,” he said.

The higher figure would be more than half of the P10 billion the government said it would initially spend to rebuild Marawi, which was liberated from pro-Islamic State terrorist forces last week after a five-month military campaign.

The EU has spent around 200 million euros in development aid in the Philippines, Jessen told reporters on the sidelines of the Energy Smart Philippines forum.

The European bloc, one of the country’s most important global political and economic partners, has been the target of diatribes from the Duterte administration for expressing concerns about human rights violations and the rising death toll in the President’s war on drugs.

The President has threatened to cut ties with EU and send their ambassadors home.

Mr. Duterte and later Foreign Secretary Alan Peter Cayetano said the Philippines would reject EU grants because they came with conditions that supposedly gave aid donors the excuse to meddle in the country’s internal affairs.

Cayetano later clarified that this policy only applied to aid or grants that carried such “conditionality.”

“I expect the initial misunderstandings we had in the past to be ironed out as we move forward. In my view, the word conditionality has been slightly abused,” Jessen said.

He said he met Cayetano and Finance Secretary Carlos Dominguez III on Tuesday and described them as “practical people.”

The EU envoy said any grant would require reasonable conditions such as transparency in the implementation of aid-funded projects and the assurance of a corruption-free use of grants.

“Obviously, when we support Mindanao, we want the money to go to Mindanao. So you can say it’s [a] condition,” Jessen said.

“But that, in my view, is very normal,” he added. “We don’t want that money to be spent [on] something else. It’s not conditionality but it’s how we agree to use this amount of development grants.”

He said donors to the Philippines or any other country who discover “serious corruption” in the implementation of an aid-funded project “have a certain right to stop that particular project.”

“You can say that’s a condition,” he said.

Read Next
Asean, China to start negotiating code of conduct
EDITORS' PICK
Current dominant strain of COVID-19 more infectious than original—study
Water remains our saving grace right now
EuroMillions Superdraw: A lottery draw unlike any other is coming to the Philippines
DOLE: Return of OFWs’ remains from Saudi to be ‘delayed,’ deadline moved to ‘early next week’
Smart releases Hyun Bin’s second TVC
‘Justice will be done,’ Duterte assures as he vowed probe on Jolo incident to bare ‘truth’
MOST READ
Locsin warns of ‘severest response’ if China’s army drills in SCS ‘spill over’ to PH domain
Duterte tells military: No other president looked at you the way I did
Man who stole 2 cans of luncheon meat lands in jail in Manila
VP Leni Robredo: ‘Remember, you were made for these times’
Don't miss out on the latest news and information.