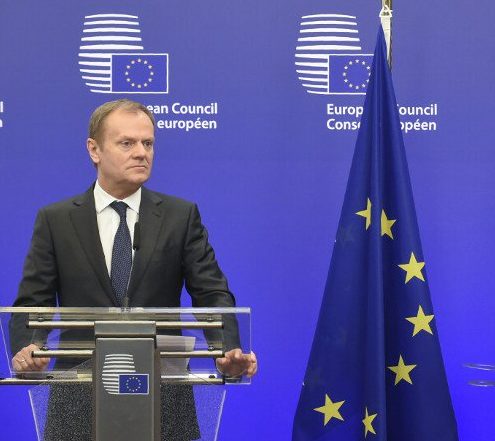 Angara, President Duterte’s special envoy to the European Union, said on Thursday that he was certain that the President would hold bilateral talks with Tusk during his visit to Manila next month to attend the Association of Southeast Asian Nations (Asean) summit.

“That’s a big thing. It’s probably bigger than the visit of Donald Trump because the EU is much, much bigger in terms of influence than Donald Trump,” Angara told reporters in Malacañang.

“And Donald Tusk is a much respected leader,” he added.

Tusk will visit Manila to attend the 40th anniversary of the Asean-EU Commemorative Summit. He was also invited as a “guest of the chair” to the luncheon in honor of East Asia  leaders.

“That means he is a dialogue partner,” Angara said.

In a press briefing in Malacañang, the Department of Foreign Affairs (DFA) said the expected meeting between Mr. Duterte and Tusk “would go a long way in clarifying” the issues that pestered Manila’s ties with the European Union recently.

DFA spokesperson Robespierre Bolivar said a meeting between the two leaders, although still unconfirmed, would also be in recognition of the Philippines’ “longstanding and strategic engagement” with the European Union.

The Philippines’ relationship with the European Union hit a snag last week after Mr. Duterte decided that the Philippine government would no longer accept new EU grants or aid due to its criticisms of his war on drugs.

Angara claimed that Mr. Duterte’s tirades were not directed at the European Union but at those who “misrepresented themselves” as EU officials.

“It’s a tirade against those who come here and say 10,000 Filipinos were extrajudicially killed,” he said.

Angara said the tirade was not against the institution. “The EU is an institution of 27 countries. It’s just directed at those who come here and represent themselves as EU delegations when in fact they’re not,” he said.