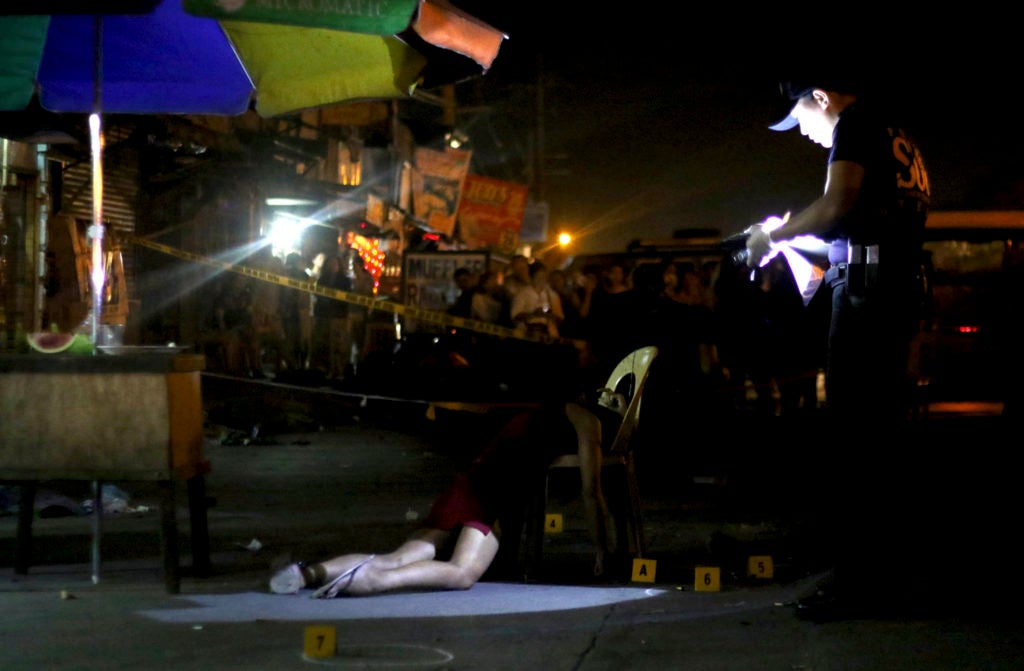 DRUG KILLING The body of Christina Padual leans on a chair at Barangay Holy Spirit in Quezon City, after masked men killed her in March, along with her boyfriend who was allegedly involved in drugs and was once arrested in a police operation. —RICHARD A. REYES

Extradjudicial killings happened under past administrations, but the human rights situation in the Philippines seriously deteriorated in the second half of 2016 after President Rodrigo Duterte assumed office, according to the European Union.

In its annual global human rights report for 2016 released last week, the European Union said extrajudicial killings decreased under the Aquino administration but worsened when Mr. Duterte ordered a crackdown on illegal drugs.

“Despite positive developments in some areas, the human rights situation in the second half of the year (2016) has considerably worsened as a consequence of the so-called war on drugs,” the European Union said in its 2016 Annual Report on Human Rights and Democracy in the World.

“It should, however, be noted that some trends and circumstances detrimental to human rights such as extrajudicial killings, including killings of human rights defenders, indigenous people and journalists, and the climate of impunity were already present under previous administrations,” it added.

Malacañang did not immediately respond to the Inquirer’s requests for comment on Monday.

Since last year, EU member-nations have been calling on the Philippines to investigate the spate of killings of suspected drug users and pushers.

Thousands of others have been killed by motorcycle-riding gunmen in what police say could be a turf war among drug gangs.

Rights groups, however, said the unknown assailants could be hired guns working for the police or policemen themselves.

The killings have drawn expressions of concern over human rights violations in the Philippines from the United States, European Union and United Nations.

On March 16, the European Parliament adopted a resolution urging the Duterte administration to put an end to the killings in the war on drugs and to “prioritize” the fight against drug trafficking networks and drug barons over tracking down small-scale consumers.

The EU lawmakers also called for the immediate release from detention of Sen. Leila de Lima, citing concerns that the drug charges that had been brought against the highest-profile critic of Mr. Duterte’s war on drugs were “almost entirely fabricated.”

They urged the European Commission to use all available instruments to persuade the Philippines to put an end to the killings in the war on drugs, “including, in the absence of any substantive improvements in the next few months, procedural steps with a view to possible removal GSP+ preference.”

The General System of Preference (GSP+) deal allows 6,200 Philippine products to enter the European Union duty free. It is under review and an EU report is expected in January.

The adoption of the resolution angered Mr. Duterte, who called the EU lawmakers “crazies.”

“If I have the preference, I’ll hang all of you. You are putting us down,” Mr. Duterte said.

He has since been lambasting the European Union for criticizing his war on drugs.

Last week, after European parliamentarians visited Manila and urged an end to the drug killings and a stop to the harassment of Chief Justice Maria Lourdes Sereno, Ombudsman Conchita Carpio Morales and Sen. Risa Hontiveros, Mr. Duterte ordered the rejection of aid from the European Union to stop the bloc from meddling in Philippine affairs.

But, apparently in reaction to local and international condemnation, Mr. Duterte removed the PNP from the lead role in the war on drugs and designated the Presidential Drug Enforcement Agency as the “sole agency” to carry out the campaign against narcotics.

“One major problem in the Philippines is the prevailing culture of impunity since cases of grave human rights abuses, including killings of human rights defenders and media workers, remain largely unresolved,” the European Union said in its report.

It said that among the 31 human rights defenders reported killed last year was a beneficiary of an EU-funded project.

The 28-nation bloc pointed out that through project grants, it has supported activities of human and land rights defenders and has supported justice sector reform and efforts to combat impunity.

The European Union said it had also supported the Mindanao peace process and the full implementation of the 2012 Responsible Parenthood and Reproductive Health Act.

While the war on drugs dealt a black-eye to the Philippines’ record, the bloc said positive developments included the landmark “Freedom of Information Order,” the presidential task force against media violence, peace negotiations with Mindanao separatists and communist rebels (which were scuttled this year) and a socioeconomic agenda.