Equipment donation from China for Marawi now in Iligan Port 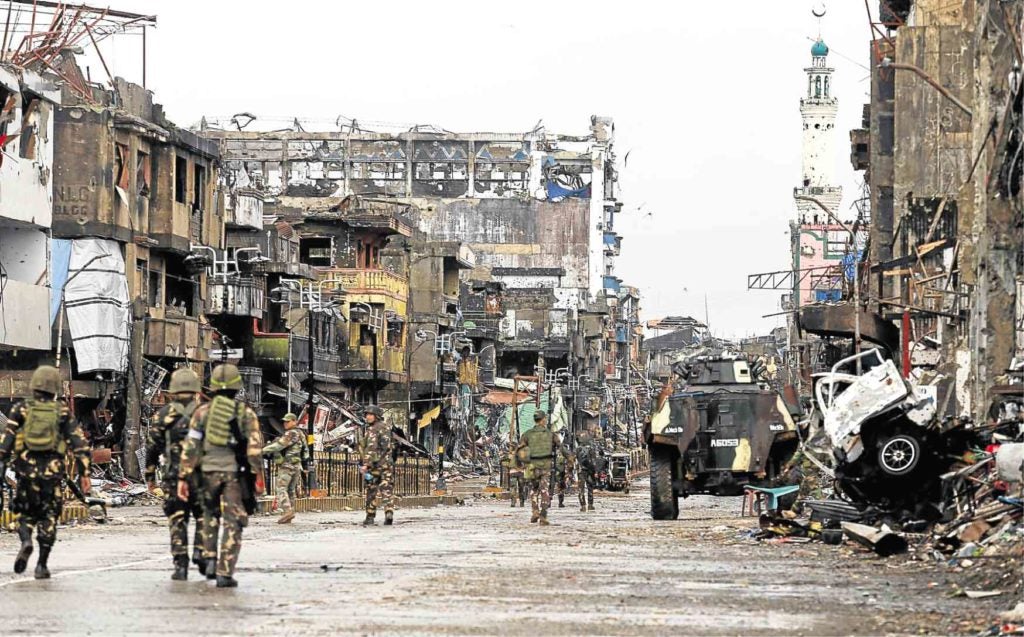 Destruction greeted soldiers as they patrol Bangolo district in Marawi after President Duterte declared the city free
from influence of terrorists. —JEOFFREY MAITEM

About $3 million (P155 million) worth of heavy equipment donated by the Chinese government for rehabilitation efforts in Marawi City has arrived in Iligan City, according to the Department of Finance (DOF).

Finance Secretary Carlos Dominguez III, in a statement, said that the Philippine and Chinese governments were now facilitating the documents in preparation for the official turnover of the donation, tentatively set later this month at the Iligan Port, where the cargo arrived on Oct. 9.

“We are thankful to the Chinese government for the swift and timely arrival of its donation,” Dominguez said.

“China was among the first countries to offer its assistance in rehabilitating Marawi City, a gesture that further cements our strong bilateral relations and reflects the warm friendship between our two countries,” he added.

Dominguez said the Department of Public Works and Highways, the agency sitting as vice chair of Task Force Bangon Marawi, had been tasked to oversee the use of the equipment especially since this was a government-to-government donation.

In August, Dominguez talked of plans for the Bureau of Treasury to sell “patriotic” bonds to help fund Marawi’s rehabilitation.

“We expect investors’ confidence to strengthen further and the economy to grow even faster now that the conflict [in Marawi] has been virtually resolved, and the government has started raising spending on infrastructure and human capital development, which will supercharge growth and create more jobs for our people,” Dominguez said.

Mr. Duterte declared last week that Marawi had been “liberated” from the influence of terrorists who laid siege to the city on May 23. On Monday, the military stopped combat operations in the Lanao del Sur provincial capital, signaling the end of the five-month war.

The DOF said China had also donated security material and equipment to the Philippine National Police, Philippine Drug Enforcement Agency, and the Presidential Security Group as part of Beijing’s commitment under the Agreement for Economic and Technical Cooperation with the Philippines that was signed during Mr. Duterte’s state visit last year.

The agreement involves a grant of 100-million renminbi (about P776 million) from China to implement projects for “anti-illegal drugs and law enforcement security cooperation.”

The DOF said that the government was also set to sign with China an agreement in the form of exchange of letters for the construction of drug rehabilitation facilities in the provinces of Agusan del Sur and Sarangani, both of which would be funded by a $60-million grant from Beijing.

According to the DOF’s International Finance Group, the Department of Health is now facilitating the necessary documents to clear the way for the construction of the rehabilitation facilities.