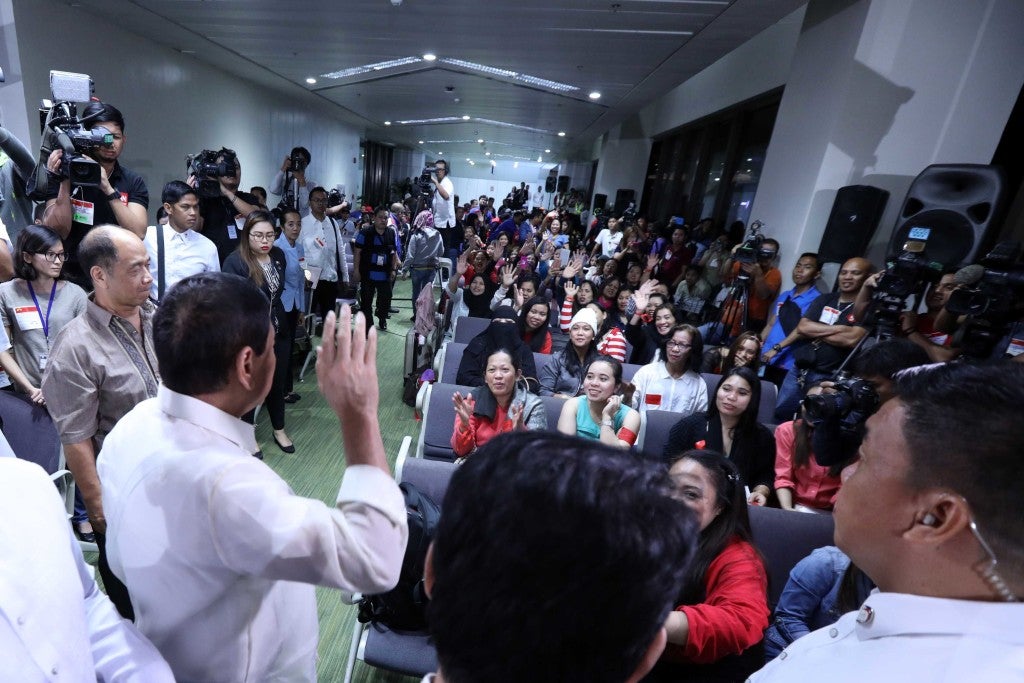 President Rodrigo Roa Duterte mingles with the 160 repatriated overseas Filipino workers (OFWs) who were granted amnesty after they were found working illegally in the Kingdom Saudi Arabia. The President welcomed the repatriated ‘runaway’ OFWs and provided them with cash assistance upon his arrival at the Ninoy Aquino International Airport Terminal 1 on April 17, 2017, following his successful visits to the Kingdom of Saudi Arabia, Bahrain and Qatar. PRESIDENTIAL PHOTO / ACE MORANDANTE

While intra-Asean migration significantly rose during the past decade, more Filipinos were able to find greener pastures outside the region, thanks to government policies that reduced costs for migrant workers, the World Bank said Monday.

“The Philippines has a highly developed support system for migrant workers that is a model for other sending countries. To build on this status, the country should continue to evaluate and improve its migration management system, including oversight of recruitment agencies, programs for returned migrants, and data sharing and interoperability,” the World Bank said in the report titled “Migrating to Opportunity: Overcoming Barriers to Labor Mobility in Southeast Asia.”

In a video conference, Mauro Testaverde, World Bank economist for the social protection and jobs global practice, told reporters that migrations costs elsewhere in the Asean region were lower if skilled laborers were to transfer to a neighboring country.

But in the case of the Philippines, “government policy played a very important role in migration,” said Testaverde, who was also the lead author of the report.

The Philippine government was “matching workers to jobs at reduced cost so they can go to farther destinations such as the Middle East and the United States,” Testaverde said.

The report noted that “the Philippines is not only a significant sender of migrants to the Middle East and the United States, but the origin of about a quarter of the world’s ship crews.”

Remittances from Filipinos working and living overseas accounted for 10 percent of the Philippines’ gross domestic product in 2015, among the highest shares in the region, World Bank data showed.

A total of about $62 billion in remittances were sent back to Asean member-countries in 2015, it said.

“In the Philippines, households that are able to send a member abroad have twofold or threefold greater odds of escaping poverty,” the World Bank said.

Across the region, “intra-regional migration in Asean increased significantly between 1995 and 2015, turning Malaysia, Singapore, and Thailand into regional migration hubs with 6.5 million migrants—96 percent of the total number of migrant workers,” the World Bank said in a statement.

“With the right policy choices, sending countries can reap the economic benefits of out-migration while protecting their citizens who choose to migrate for work. In receiving countries, foreign workers can fill labor shortages and promote sustained economic growth, if migration policies are aligned with their economic needs. Inappropriate policies and ineffective institutions mean that the region is missing opportunities to gain fully from migration,” World Bank chief economist for the East Asia and Pacific region Sudhir Shetty said.

“No matter where workers wish to migrate in Asean, they face mobility costs several times the annual average wage. Improvements in the migration process can ease these costs on prospective migrants, and help countries respond better to their labor market needs,” Testaverde said. /cbb