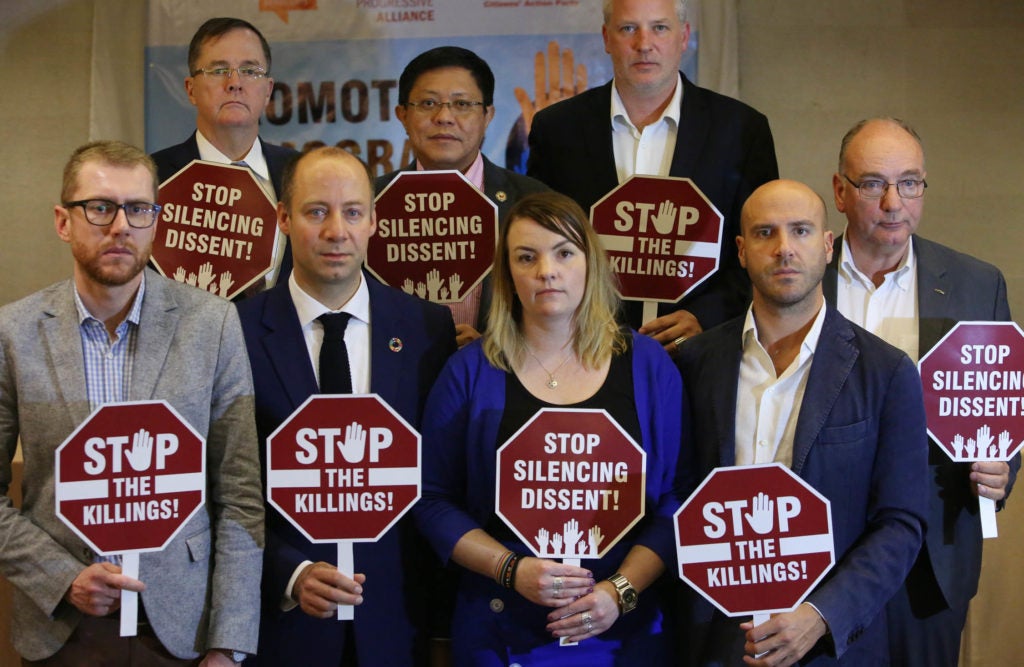 HUMAN RIGHTS MISSION Seven delegates from the Progressive Alliance and the Party of European Socialists urge the Duterte administration to stop the killing of suspected drug users and pushers and the silencing of its critics. —MARIANNE BERMUDEZ

An international human rights group and a mission of international parliamentarians and civil society leaders have warned that the Philippines faces sanctions from the United Nations and European Union (EU) if the government fails to stop the killing of suspects and allow an independent investigation of President Rodrigo Duterte’s fierce war on drugs.

If the Duterte administration continues to refuse to allow an independent investigation, the Philippines could lose its membership in the UN Human Rights Council (UNHRC) and jeopardize its relations with the council’s members, according to Human Rights Watch (HRW).

“Many of those states have bilateral relations with the Philippines and the government is jeopardizing its good relations with governments around the world,” John Fisher, Geneva director of HRW, said in an exclusive interview with Inquirer.net on Friday.

Malacañang, however, sees no risks to the Philippines’ position in the UNHRC or its relations with other countries.

Presidential spokesperson Ernesto Abella said on Monday that other nations continued to support the Philippine government’s efforts in “dealing with domestic challenges” without interfering in the country’s international affairs.

“These countries continue to treat us with mutual respect and [they’re] cognizant of our sovereignty,” Abella told reporters.

“They continue to have relationships with us and we’re on solid ground, solid economic ground. There’s no need to fear about any changes in relationships,” he said.

But parliamentarians belonging to the Progressive Alliance and the Party of European Socialists warned on Monday that the Philippines risked losing a preferential trade deal that allows 6,200 of its products to enter the European Union duty-free if it failed to immediately stop the killings and political persecution of critics.

The General System of Preference (GSP+) deal is under review and an EU report is expected in January.

“If the human rights standards are not upheld, then there may be consequences in the Philippines’ inclusion in the special trading instrument of the EU,” said German parliamentarian Arne Lietz.

Lietz called for an immediate stop to the killings, the release of detained government critics—a reference to Sen. Leila de Lima—and an independent investigation into the thousands of police killings in the crackdown on illegal drugs.

The seven-member mission visited depressed communities in Metropolitan Manila most affected by the killings and met with lawmakers and human rights advocates during a two-day visit that began on Sunday.

“The killings of persons accused, without evidence or trial, of involvement in the drug trade continue unabated even in recent days,” said a statement issued by the mission members from Europe, the United States and Australia.

Töyrä said the gross human rights violations appeared to be encouraged by Mr. Duterte himself in his public speeches.

Malacañang had no immediate comment on the EU mission’s statements. —With a report from the Associated Press