Cine Kabayan opens in UP Diliman 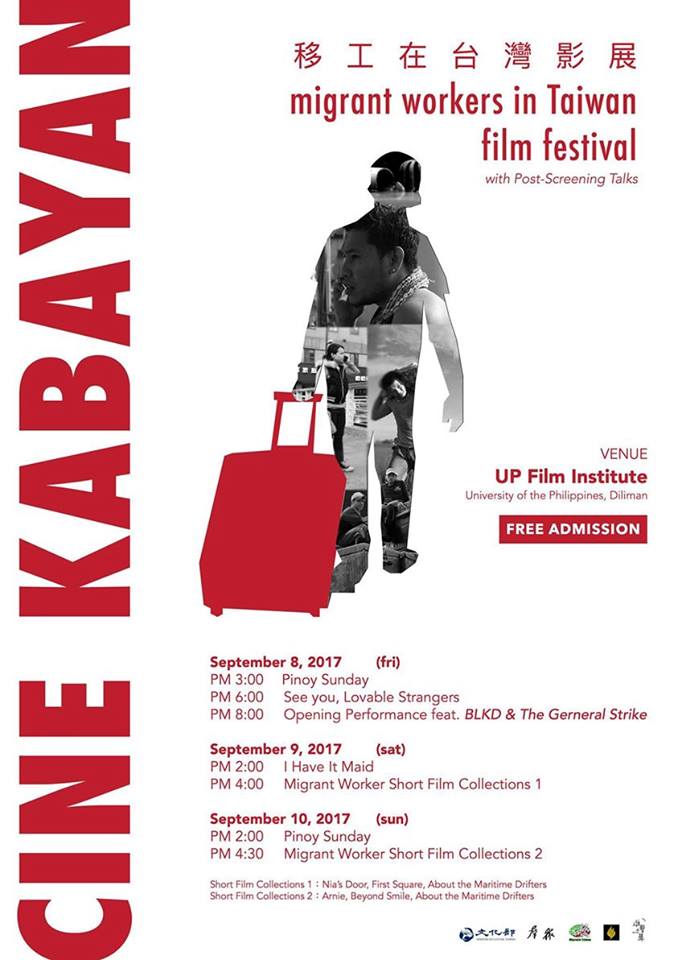 Cine Kabayan, a migrant workers film festival, goes to the University of the Philippines Film Institute this weekend, September 8-10.

The three-day event features free screening of films and documentaries on the condition and experiences of migrant workers or overseas Filipino workers in Taiwan.

Cine Kabayan is organized by “Project Sound of Strike,” a program of Serve the People (SPA), a service center and migrant worker shelter in Taoyuan, Taiwan.

SPA hopes “to improve the working conditions and social welfare for the migrant workers” by holding campaigns and cultural events and programs.

“Despite being called ‘Treasure Island,’ Taiwan is also known with the name ‘Bitter Prison,’ the organizers said in a statement. “For more than 20 years, Taiwan has officially imported workers from the Philippines and other Southeast Asian countries as supplementary labor. Until today, the number of migrant workers has surpassed 2.5% of the population of 23.5 million in Taiwan.”

“While they are hoping for bringing a better life for their family, the reality, however, has muted them with layers and layers of exploitation.”

Three full-length films and four short films will provide a glimpse of life and struggles of migrant workers, who serve as factories workers and domestic workers on the island.

Pinoy Sunday
WI Ding Ho | 2009 | Taiwan | Feature | Color | 1h 24min
Two lonely men discover what they think is a life-changing windfall in this comedy-drama from Taiwan. Manuel (Epy Quizon) and Dado (Bayani Agbayani) are a pair of Filipino guest workers struggling to earn a living at a bicycle factory in Taiwan. They work long hours six days a week and are forced to live in a dormitory near the factory, with Sunday the only day where they can indulge their own interests. Manuel wants to win the heart of a beautiful woman, while Dado just wants to make enough money to go back to his wife and kids. One Sunday, after attending church, the men find a beautiful red leather couch that represents the sort of homey touch lacking in their lives. The couch is theirs if they can carry it away, but it’s on one side of the city of Taipei and the dorm is on the other, and getting their new piece of furniture home before curfew leads to a series of unexpected adventures. Pinoy Sunday was the first feature film from Malaysian-born filmmaker Ho Wi Ding.

See You, Lovable Strangers
NGUYEN Kim Hong & TSAI Tsung Lung|2016|Taiwan|Documentary | Color | 62min
In 2017, the total number of migrant workers in Taiwan has reached 600,000, which is higher than the total population of indigenous people in Taiwan as well as new immigrants. However, the conditions of life and work of migrant workers are completely different from the rest of Taiwan. The lives of undocumented, or “illegal”, migrant workers are unknown to most people. This film is a sequel to the 2013 film LOVELY STRANGERS, which won the Outstanding Award at Golden Harvest Awards. SEE YOU, LOVABLE STRANGERS continues to follow Vietnamese migrant workers, to examine the reasons behind their numerous escapes and to trace the family situations of those who were deported from Taiwan.

I Have It Maid
Alex Wolfgram, Nick Vaky | 2014 | USA & Taiwan | Documentary | Color | 67 min
I Have It Maid is a documentary that discusses the phenomenon of runaway Filipino migrant workers in Taiwan, specifically Filipino domestic household workers, and the reasons linked to their fleeing. During the production, the team followed Vicky, the main character in the documentary, back to her hometown in the Philippines, trying to trace back how the broker companies export Filipino workers to oversea. It also examined why Vicky decided to run away as her final and only solution to face the dire working condition. Through interviews with brokers from both Taiwan and the Philippines, scholars, NGO workers and etc…, I HAVE IT MAID aims to raise the awareness on the issue of these runaway migrant workers being alone in another country, hoping to make a positive influence on the current policy of migrant workers.

Short Film Collections:
About the Maritime Drifters
HUNG Ya-Chih | 2016—Taiwan—Documentary—Color—23 min
Due to the shortage of labor, the fishing industry has imported Indonesian and Philippine workers into Taiwan since 1992. The unpredictable and unstable working environment on the sea has caused disputes on labor and health insurance, working hours and overtime pay. How can we adjust the Labor Standards Act to truly protect foreign workers’ and employers’ rights and benefits?

Nia travels far from her home, the Philippines, to Taiwan, to work as a family maid. Nia likes to keep to herself in her private room, where a door separates her from her employers. This annoys her employer and conflicts arise between them.

Lovely Sunday
Wen-Shuo Hsueh | 2017 | Taiwan | Fiction | Color | 30 min
Sunday, the first square which belongs to Southeast Asian. Jane and Randy, two Filipinos meet each other in the first square, and spend a lovely Sunday together.

Beyond Our Smile
CHEN Xiao-Wen | 2017 | Taiwan | Documentary | Color | 37 min
Beyond Our Smile is a documentary portraying the tough lives of migrant workers in Taiwan. The story is about Sherry, who once worked as a domestic helper in Taiwan, and her Taiwanese husband. Like many of her fellow Filipinos, she suffered maltreatments from her employers until she met Lennon, who helped her get out of the “hell”. And soon after that,they fell in love and got engaged with each other. The experiences Sherry had once gone through pushed her determination as a NGO worker to help other migrant workers