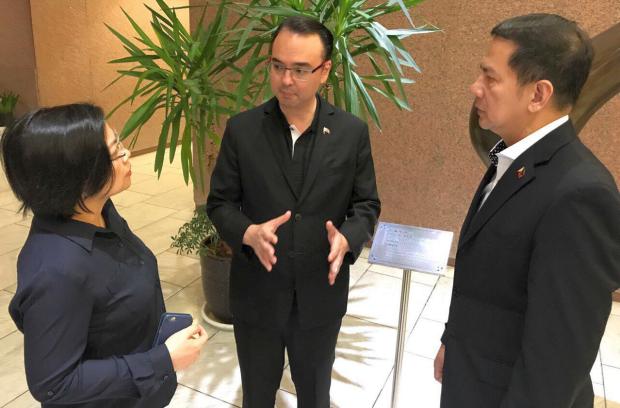 The Philippine government on Sunday expressed its worry over reports that North Korea has succeeded in developing a hydrogen bomb.

“We are gravely concerned over this hydrogen bomb testing by the Democratic People’s Republic of Korea (DPRK),”  Foreign Affairs Secretary Alan Peter Cayetano said in a statement. “Such provocative actions undermine regional peace and stability.”

Cayetano, who is currently in Seoul for an official visit, said North Korea’s actions not only resulted in the flouting of its commitments to United Nations Security Council resolutions but also limited “available options for meaningful dialogue to address the real issues confronting the Korean Peninsula.”

“The Philippines urges the DPRK to return to the negotiating table. Asean (Association of Southeast Asian Nations) is ready to play a role in creating diplomatic space to effect meaningful dialogue,” Cayetano said.

The Philippines is this year’s Asean chair.

Cayetano, who met with Foreign Affairs Assistant Secretary for Asia-Pacific Affairs Millicent Cruz-Paredes and Ambassador to Seoul Raul Hernandez to discuss the situation, ordered embassy staff in Seoul to ensure the safety of the 65,000 Filipinos living and working in South Korea.

He asked that Filipinos be made aware of the embassy’s contingency plans in case the situation worsens.

Cayetano reportedly met with 300 members of the Filipino community in Seoul and advised them to monitor the embassy’s social media accounts for emergency alerts and advisories.

North Korea has been subjected to UN Security Council sanctions because of its nuclear and ballistic missile programs.

A few days ago, it launched a ballistic missile that flew over the Japanese island of Hokkaido. /atm