Carpio: Silence on China move tantamount to ‘disloyalty to republic’ 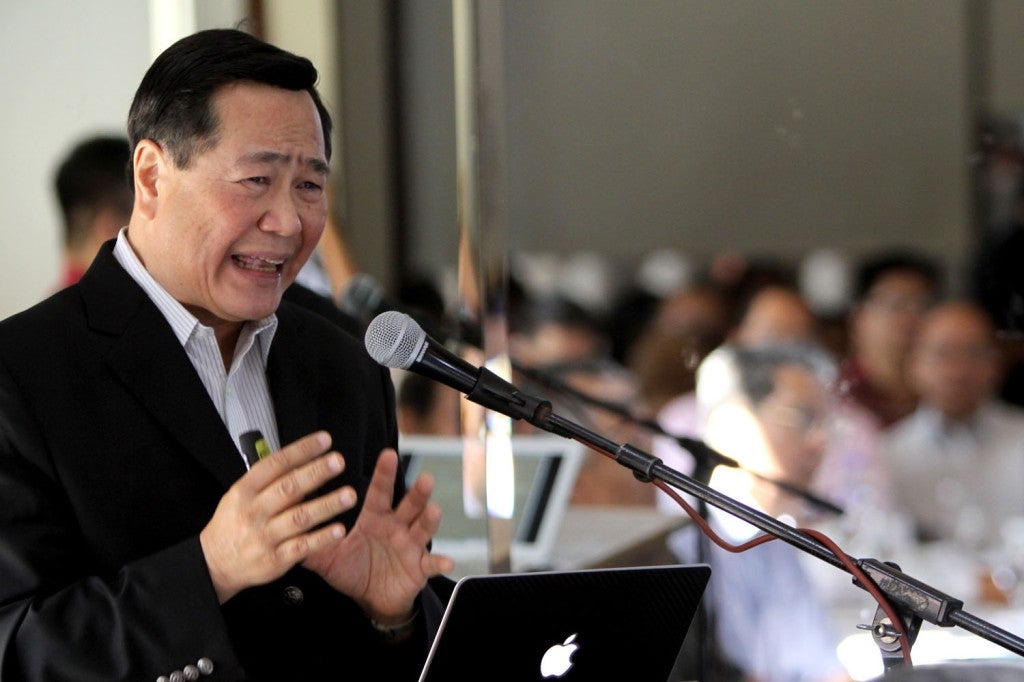 A failure by the Duterte administration to file a diplomatic protest against China over the presence of its ships in Sandy Cay, a Philippine land territory, will be tantamount to “disloyalty to the republic,” Supreme Court Senior Associate Justice Antonio Carpio said on Thursday.

“We have to be clear, we have to ask them what are you doing? Why are you not protesting formally?” Carpio told the Inquirer.

The senior justice said that failure of the Philippine government to protest China’s actions in Sandy Cay would allow China to “claim later on that we consented” to their occupation of the area.

“Every state will protest to preserve its rights,” Carpio said. “Protest is a peaceful means. You are not even showing a gun. You are just signing a diplomatic protest.”

The administration’s refusal to file a protest, as mentioned by President Duterte and Foreign Secretary Alan Peter Cayetano, is not tantamount to treason because “treason is a technical word used during a war,” Carpio said.

In the current situation, he said: “You call that disloyalty to the republic.”

Carpio said that failure to protest China’s presence in Sandy Cay meant “you agree to be seized by China.”

He spoke to the Inquirer late Thursday afternoon, after he gave a talk on the maritime dispute in the South China Sea before an audience of 600 comprised of students, nuns, teachers, and school personnel at St. Theresa’s College in Quezon City.

He noted that if Cayetano did not want to file a diplomatic protest over China’s presence in Sandy Cay, “the implication there is we are acquiescing [to China].”

“We will have a problem later on,” Carpio said.

Sandy Cay is a sandbar that is 4.6 kilometers (2.5 nautical miles) away from Pag-asa (Thitu) Island, which is under the jurisdiction of Palawan province.

Pag-asa is the largest, and the only inhabited, island in the Kalayaan Island Group, the area in the Spratlys that the Philippines has marked as part of its territory with modest military garrisons.

Sandy Cay is now above water throughout the year, a change from its visibility of only half a year during low tide. The change was a natural occurrence caused by China’s dredging in nearby Zamora (Subi) Reef, where they built an artificial island.

Carpio said that the pulverized corals in Zamora Reef drifted to Sandy Cay. The additional sand caused Sandy Cay to be permanently above water.

“China saw this. We also saw this. [Sandy Cay] is now above water. It is territory. It has territorial sea,” Carpio said.

If the Philippines loses Sandy Cay to China, Pag-asa Island would lose one-third or more of its territorial sea, leaving Filipino fishermen with a smaller area to fish, he said.

Carpio reiterated his position that China’s presence in Sandy Cay was tantamount to an invasion, noting that the Chinese vessels have not left the area.

Both Mr. Duterte and Cayetano had scoffed at Carpio’s claim.

The senior justice said a state traditionally invades another state “by sending troops to march, by sending tanks to roll in.”

“When you seize something using military, armed ships, that is invasion. [That is] use of force or threat of force. This is threat of force,” he added.

Carpio noted that the Chinese vessels prevented the Philippines’ Bureau of Fisheries and Aquatic Resources ship from going near the sandbar.

He said that this was “exactly what China did in Scarborough (Panatag Shoal),” prompting the Philippine government at that time to officially declare that China “seized Scarborough by just surrounding it with ships.”

At the forum, Carpio stressed that with China’s continued aggressive claims in the South China Sea, “the Philippines is now facing its greatest national security threat since World War II.”

“And sometimes, our government thinks China is our best friend,” Carpio said.