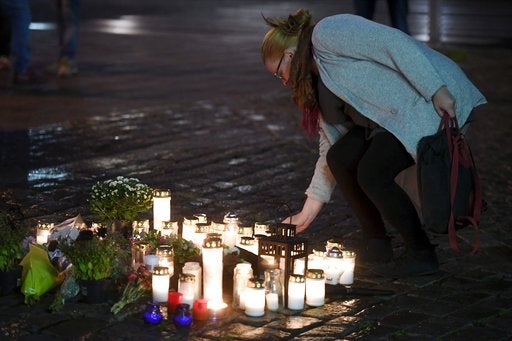 A woman places a memorial candle at the Market Square for the victims of Friday’s stabbings in Turku, Finland, on Friday evening, Aug. 18, 2017. AP

The Department of Foreign Affairs on Sunday said there were no Filipinos hurt in the Finland knife attack that left two people dead.

“We condemn any act that seeks to undermine peaceful and tolerant societies,” Foreign Affairs Secretary Alan Peter Cayetano said in a statement, expressing sympathies to the Finnish government and to the families of the victims.

Reports said a Moroccan asylum seeker deliberately attacked women in Turku, which was once the capital of Finland.

The DFA said four foreign nationals were wounded although none of them were from the Philippines.

“We urge our 3,500 kababayans in Finland to stay vigilant and to contact our Honorary Consulate General in Helsinki or our Embassy in Oslo if in need of assistance,” Cayetano said.

Cayetano said the Philippine Embassy in Norway, which has jurisdiction over Finland, is in close coordination with Philippine Honorary Consulate General in Helsinki.

Meanwhile, the agency said two Filipinos based in Italy were also injured in another terrorist attack in Barcelona, “bringing to four the total number of Filipinos that it is extending assistance to.”

Cayetano said Chargé d’Affaires Emmanuel Fernandez of the Philippine Embassy in Madrid is now in Barcelona to visit the 43-year-old Filipino seriously injured in the attack, which left at least 13 people dead and hundreds injured. Authorities are still searching for her seven-year-old son.

“Our Embassy is now on the ground in Barcelona and is working with our Honorary Consulate to extend all possible assistance to our kababayan who remains in serious condition at a hospital there,” Cayetano said.

“We are all praying that she would swiftly recover from her injuries and that we would be able to help find her missing child,” he added.

The woman is married to a British national and is based in Australia with her son. They both have Philippine passports.

The DFA said Chargè d’Affaires Fernandez visited four Irish citizens of Filipino descent at a local hospital and reported that they are recovering well.

The agency said the Philippine Consulate General in Milan will assist the two other Filipinos who were injured. They reportedly sustained bruises after the incident. DFA said they will be accompanied to a hospital by Consul General Marichu Mauro on Monday  “for checkup and debriefing.”