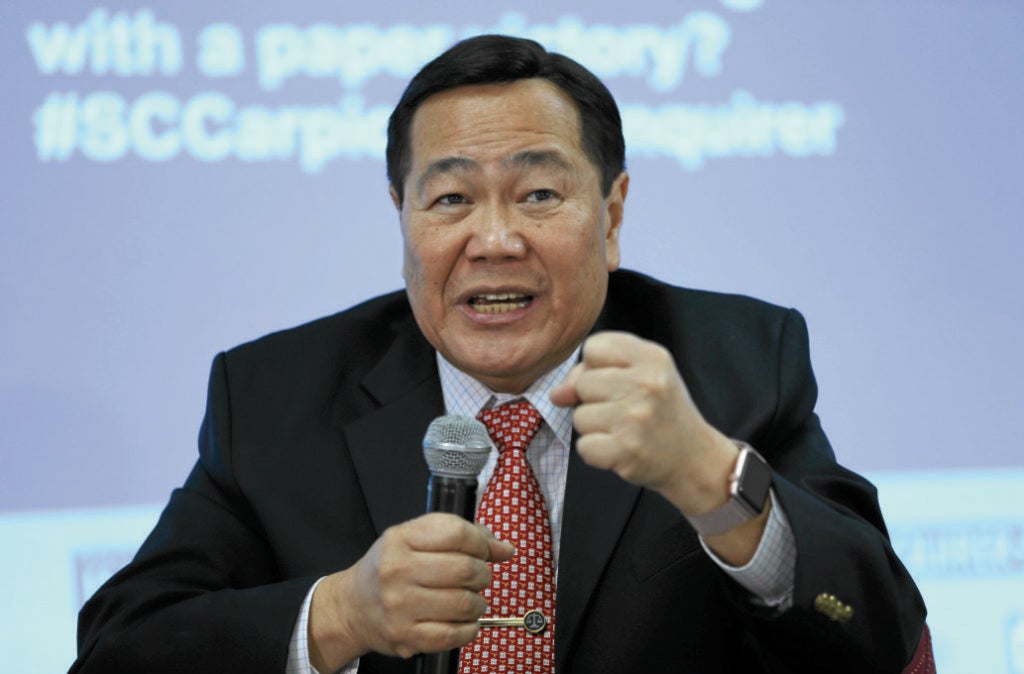 Supreme Court Senior Associate Justice Antonio Carpio urged the government to act on what he called an “invasion of Philippine territory by China” as he confirmed Chinese ships were now guarding a newly created island well within Philippine territorial waters in the West Philippine Sea.

In a statement on Saturday, Carpio said two frigates, a coast guard vessel and two fishing boats of China were guarding Sandy Cay, a sandbar some 4.6 kilometers (2.5 nautical miles) from Philippine-occupied Pag-asa Island that had permanently protruded above the water.

Carpio, in his statement, said the Chinese ships were “well within” the 22 km (12 nautical miles) territorial sea of Pag-asa and could not claim “innocent passage” or invoke freedom of navigation in the high seas to explain their presence in the area.

“Sandy Cay is a Philippine land territory that is being seized (to put it mildly) or being invaded (to put it frankly) by China,” Carpio said.

The senior Supreme Court justice was part of the team that won the arbitral ruling last year that invalidated China’s sweeping claims to the South China Sea that infringed on the Philippines’ exclusive economic zone in the West Philippine Sea.

Should China succeed in occupying Sandy Cay, Carpio warned, Pag-asa would lose a third of its territorial sea including Zamora (Subi) Reef, which China had turned into an artificial island outpost.

“This means China is now virtually occupying a new geologic feature within the territorial sea of Pag-asa, a Philippine territory, in clear violation of China’s supposed vow not to occupy anymore islands in the Spratlys,” Carpio said.

“This is worse than what happened in Scarborough Shoal,” he added, referring to Bajo de Masinloc or Panatag Shoal off Zambales which became the center of a territorial dispute in 2012 between China and the Philippines.

“By any yardstick, this is seizure of Philippine territory,” Carpio continued.

Addressing President Duterte and Foreign Secretary Alan Peter Cayetano, Carpio reminded them of a promise they made not to concede a single inch of Philippine territory to China.

“The very least that they could do now is to vigorously protest this invasion of Philippine territory by China,” Carpio said.

The treaty provides for US military backing should the Philippines come under attack by a foreign aggressor and call for help.

Sandy Cay used to be a sandbar that appears only during low tide and disappears during high tide between Pag-asa and Zamora Reef.

However, due to China’s dredging in Zamora Reef, pulverized corals were swept atop Sandy Cay, turning it into “land or territory capable of sovereign ownership,” according to Carpio.

But Carpio said China could not lay claim to the newly created island even under its discredited historic claim since Sandy Cay formed within the Philippines’ territorial sea.

“If Sandy Cay becomes Chinese territory, it will reduce by a third or more Pag-asa’s territorial sea, depending on how large a reclaimed area China will create out of Sandy Cay,” Carpio said.

“It will also prevent the Philippines from extending the territorial sea of Pag-asa to include Subi (Zamora) Reef,” he said.