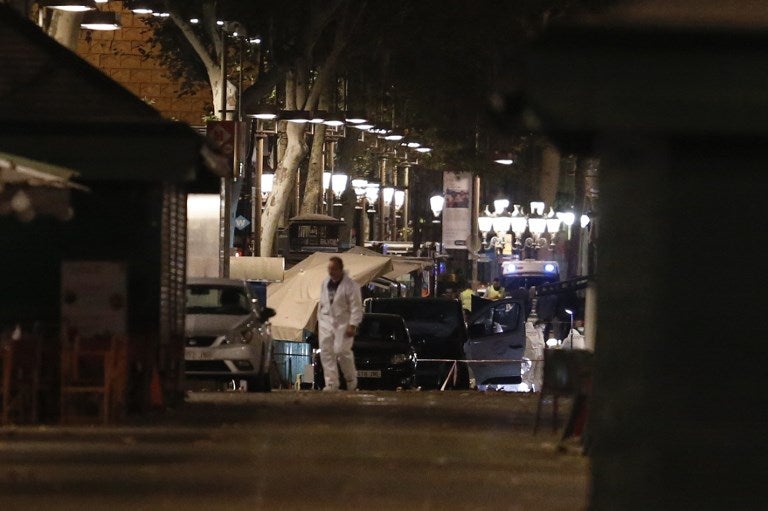 Forensic policemen arrive in the cordoned off area after a van plowed into the crowd, killing at least 13 people and injuring around 100 others on the Rambla in Barcelona.
A driver deliberately rammed a van into a crowd on Barcelona’s most popular street on August 17, 2017 killing at least 13 people before fleeing to a nearby bar, police said.
Officers in Spain’s second-largest city said the ramming on Las Ramblas was a “terrorist attack”. The driver of a van that mowed into a packed street in Barcelona is still on the run, Spanish police said. AFP

(Updated, 10:19 a.m.) The Philippine government condemned on Friday the deadly attack in Barcelona, Spain that left at least 13 people dead and injured around a hundred others.

“The Philippines condemns in the strongest terms this disturbing act of terror perpetrated by extremists against innocent men, women and children in Barcelona,” Foreign Affairs Secretary Alan Peter Cayetano said in a statement.

“We stand in solidarity with the people of Catalonia and all of Spain and the rest of the world as we fight this common scourge,” he added.

A van plowed through pedestrians in Barcelona’s Las Ramblas tourist district on Thursday, killing 13 people and injuring around a hundred other, most of whom were tourists.

The Islamic State has claimed responsibility for the attack, while Spanish police said they have killed four suspected terrorists in Cambrils.

The Philippines’ condemnation came after leaders from other countries also slammed the terrorist attack.

“We are one with the peace-loving people of the international community in condemning this latest attack in Spain on Thursday that left at least 13 people dead and injured more than 100 others,” Presidential Spokesperson Ernesto Abella said in a statement.

Malacañang expressed condolences to the families of the victims in the deadly van carnage.

“Our hearts and prayers go out to the families and loved ones of the innocent victims who perished and those who got injured in Barcelona,” he said.

Four members of a Filipino-Irish family was hurt in the attack, the Department of Foreign Affairs (DFA) said. The agency, however, did not release the names of those who were hurt but said that the Philippine Honorary Consulate went to the hospital to check on them.

Quoting report from Honorary Consul Jordi Puig Roches, the DFA said that the mother and her daughter have been released from the hospital but that the father and his son are still under observation and are being assisted by the Irish Honorary Consul there.

The DFA said the Philippine Embassy in Madrid and the Honorary Consulate in Barcelona have been in touch with authorities and leaders of the Filipino communities there to make sure that the 20,000 other Filipino residents of the northeastern Spanish city are safe. IDL