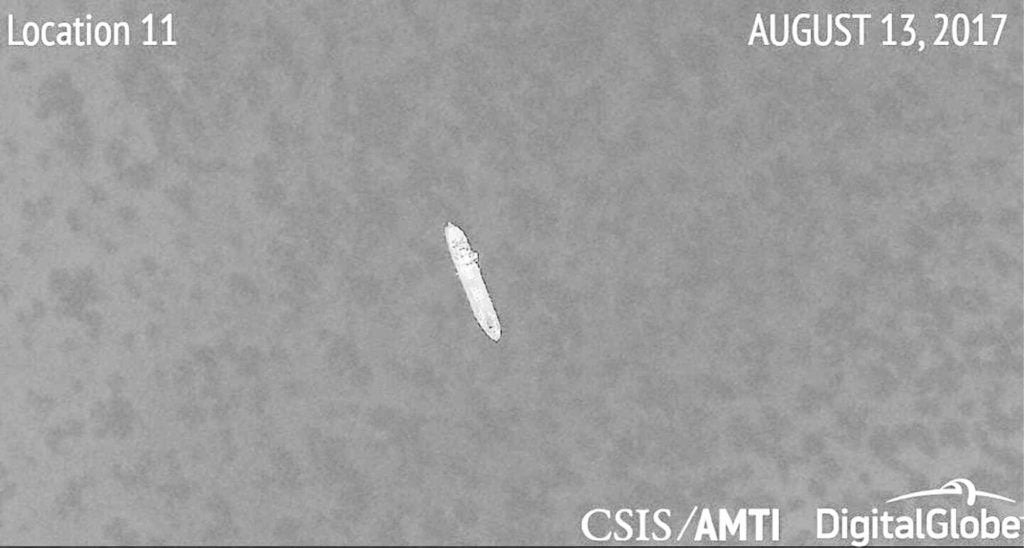 More Chinese ships are believed to be in the area but are not detected by satellite cameras because of cloud cover. —AMTI

The satellite photos showed Chinese vessels operating within one to three nautical miles off Pag-asa Island, the largest of the 10 islands in Spratlys occupied by the Philippines and home to more than 100 Filipinos.

The Washington-based Asia Maritime Transparency Initiative of the Center for Strategic and International Studies (Amti-CSIS) on Thursday released satellite photos taken on Aug. 13 showing at least 11 Chinese ships around Pag-asa.

Amti said the pictures “can help shine some light” on a report made by Magdalo Rep. Gary Alejano about the presence of Chinese government and civilian vessels in the area.

The satellite pictures showed Chinese vessels in 12 locations around Pag-asa. “At least two appear to be actively fishing with their nets visibly in the water,” Amti said.

A Philippine vessel was also photographed docked at an unoccupied sandbar nearest to Pag-asa, which is under the jurisdiction of Palawan province. The ship was likely there to investigate the presence of the Chinese vessels.

Amti said there were nine Chinese civilian and two government vessels near Pag-asa. It said there could possibly be more Chinese ships in the area which had not been captured by satellite pictures because of cloud cover.

“One possible explanation for the flotilla’s sudden and provocative appearance is that Beijing wanted to dissuade Manila from planned construction on Thitu,” Amti said, calling Pag-asa by its English name.

Amti said the Chinese vessels appeared in the area after the Philippine government announced plans to spend at least $32 million to upgrade facilities in Pag-asa, including a beaching ramp, desalination machines and “long overdue repairs to the islet’s crumbling runway.”

“Those upgrades have been delayed, reportedly due to inclement weather, but [Defense Secretary Delfin] Lorenzana has made clear that they remain in the pipeline,” the think tank said.

“In light of this week’s events, Manila might feel that those upgrades are even more urgent,” Amti added.

Amti said there was no official government denial of the presence of Chinese vessels around Pag-asa. Foreign Affairs Secretary Alan Peter Cayetano, while not refuting Alejano’s report, said there was no cause for alarm.

Cayetano had said he saw nothing unusual, or wrong, with the presence of Chinese vessels in the area.

The Chinese ships, said Amti, were as close as 9 nautical miles of Subi Reef, which was now occupied by China.

“It is important to note that ownership of the territorial waters in which these ships are operating is still legally disputed,” Amti said.

It said Subi, like Sandy Cay which Justice Carpio cited, “was a low-tide elevation before China built an artificial island on it.”

Amti also said that “setting aside whether Chinese ships legally can fish within 1 nautical mile of [Pag-asa], there is no doubt that doing so is highly provocative and runs counter to the narrative of a stable mutually-beneficial new status quo that Beijing has sought to project.”

It said Chinese authorities were obviously “aware” that their vessels were in the vicinity of Pag-asa because of the presence of Chinese government vessels in the area.

“At best, they permitted their operation. At worst, they escorted and guarded them,” Amti said.

“The number and rapid coordination of naval and coast guard ships suggest that this was purposely organized in advance and was not just an ad hoc response by government vessels that happened to be in the area,” Amti said.