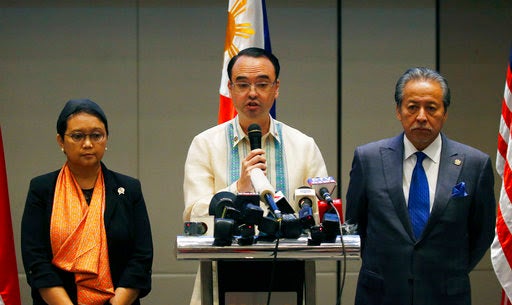 The House of Representatives foreign affairs committee on Tuesday held an executive session on a possible joint exploration deal with China over the South China Sea.

Foreign Affairs Secretary Alan Peter Cayetano attended the House hearing and said he would discuss and entertain during the closed-door session the planned joint exploration deals over the South China Sea, where countries have overlapping maritime claims against China.

“We will answer during the executive session the possibility of joint exploration and development,” Cayetano told lawmakers of the House committee on foreign affairs.

Cayetano vowed that any joint exploration deal over the South China Sea would be legal and compliant with the 1987 Constitution.

“I will assure you, any legal framework will conform with local laws and the Constitution,” Cayetano said.

Before the hearing was moved to an executive session, Cayetano presented slides to show that the Philippines is lagging behind its Association of Southeast Asian Nations (Asean) counterparts in terms of trade with China, and this despite the fact that not all Asean countries have maritime disputes with Beijing.

Cayetano said the President merely wanted to defer talks on the West Philippine Sea for the Philippines to ease relations with China, following strained ties during the previous administration that elevated the maritime dispute to the arbitral tribunal.

“President Duterte did not tear (the arbitration ruling), the description of some newspapers by mistake or some also have their own advocacy or ideology. It’s not true that the President threw into the waste basket or ripped up the arbitration award,” Cayetano said.

Cayetano said Duterte only told Chinese President Xi Jin Ping in their meeting that the President “will not bring up yet” the arbitral award, so that China and the Philippines can talk “for us to move forward.” JPV