President Rodrigo Duterte for the first time said on Friday that Chinese President Xi Jinping had threatened war if the Philippines insisted on pressing its claims in the South China Sea, parrying criticisms that he had been weak in pushing the issue and failing to use the arbitral ruling as leverage.

“I really said, ‘It’s ours. I’d like you to listen for a while.’ I said,  ‘Mr. Xi Jinping, I would insist that that is ours and I will drill oil there,’” Mr. Duterte said in a speech at the National Convention of the Philippine Coast Guard Auxiliary in Davao City.

China may claim ownership, but he said his view was that he could drill for oil because that area, which the government calls the West Philippine Sea, belongs to the Philippines.

“They replied to me, ‘We are friends. We do not want to quarrel with you… We want to maintain the present warm relationship. But if you force the issue, we’ll go to war,’” Mr. Duterte said.

“What more could I say?” he added. 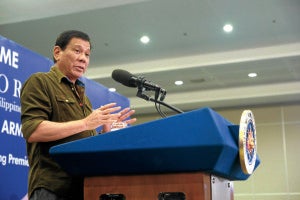 National Security Adviser Hermogenes Esperon said the meeting between the two leaders took place in Beijing during the President’s visit to China earlier this week for the One Belt, One Road initiative, an international trade conference.

Mr. Duterte said he had insisted to China that the International Arbitral Tribunal had invalidated Beijing’s expansive claims over the South China Sea, but that the Chinese government replied that its claims were historical.

China also said it would be forced to tell him the truth if he pressed the issue.

“What’s the truth? We will be forced to go to war,” he said.

But China also indicated that it was willing to discuss the arbitral ruling in the future.

“China said if we remain friends, it said, ‘We will talk about the arbitral ruling. But it cannot be now. You know why? You are not the only claimant. Vietnam is also a virulent claimant,’” he said.

He said that if it were just up to him, “we will have to fight.” But he said that with China’s superior military force, the war would result in a “massacre and it will destroy everything.”

“The first to be struck would be Palawan,” he said.