China protests after US warship sails near island 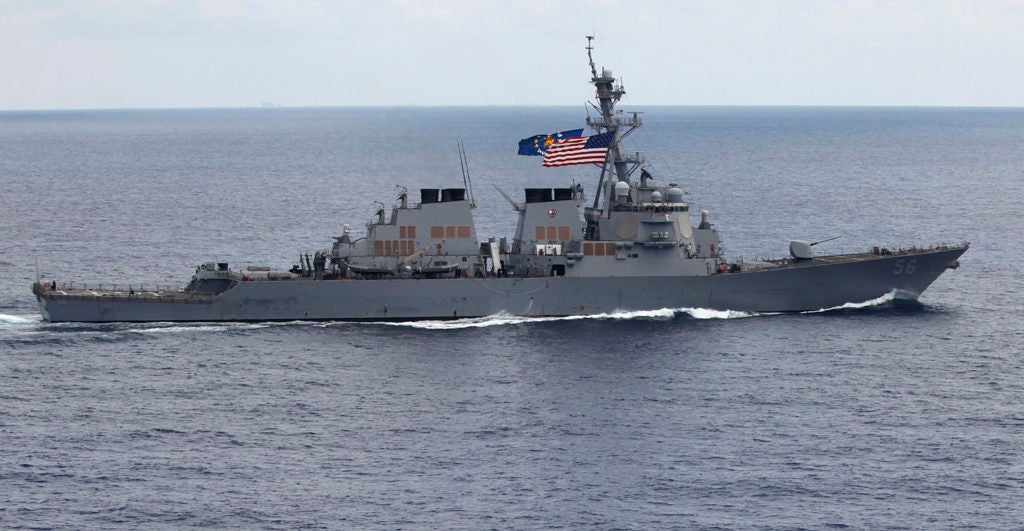 BEIJING—Beijing voiced displeasure on Friday after a US warship sailed near an artificial island in the disputed South China Sea, an operation that prompted the Chinese navy to warn off the American destroyer.

“China is strongly dissatisfied with this,” Geng said in a statement, adding that Beijing would lodge an official protest with Washington.

The USS John S. McCain destroyer sailed within six nautical miles of Mischief Reef — an artificial island built by China — on Thursday as part of a “freedom of navigation” operation, a US official said.

The reef is part of the disputed Spratly Islands in the South China Sea, which is the scene of rival claims between China and neighboring countries.

Speaking on condition of anonymity, the US official told Agence France-Presse (AFP) a Chinese frigate sent radio warnings at least 10 times to the USS McCain.

“They called and said ‘please turn around, you are in our waters’,” the official said. “We told them we are a US (ship) conducting routine operations in international waters.”

The official said the interactions were all “safe and professional,” with the operation lasting about six hours from start to finish, but Geng said such operations “seriously endanger lives”.

The freedom of navigation operation was the third of its kind carried out by the United States since President Donald Trump took office in January.

The US move came four days after the United States, Australia and Japan denounced Beijing’s island-building and militarization of the South China Sea on the sidelines of a security forum of the 10-nation Association of Southeast Asian Nations (Asean) in Manila.

China claims nearly all of the sea, through which $5 trillion in annual shipping trade passes and which is believed to sit atop vast oil and gas deposits.

Its sweeping claims overlap with Vietnam, the Philippines, Malaysia and Brunei — all Asean members — as well as Taiwan.

But in recent years Beijing has managed to weaken regional resistance by courting some ASEAN members.

On Sunday China scored a coup when Asean ministers issued a diluted statement on the dispute and agreed to its terms on talks at the Manila meeting.

China insists that a much-delayed code of conduct between it and Asean members over the disputed sea must not be legally binding, a demand to which Southeast Asian countries have so far acquiesced.

Chinese defense ministry spokesman Wu Qian said the situation in the South China Sea has “stabilized” due to the “joint efforts” of China and neighboring countries but the US operation threatened “peace and stability in the region”.

“The US military’s provocative actions will only encourage the Chinese military to further strengthen the defense capacity building and firmly defend national sovereignty and security,” Qian said.

The operation also comes amid soaring tensions on the Korean peninsula over Pyongyang’s missile program, and as the United States seeks to push China into more assertively restraining North Korea.

Pentagon spokesman Lieutenant Colonel Chris Logan declined to comment on whether there had been a freedom of navigation sailing but he said the United States would continue to do such operations.

newsinfo
PH detects local transmission of Omicron subvariant BA.2.12.1
newsinfo
OVP: Pilot’s claim vs Robredo ‘never happened’, a ‘malicious fabrication’
newsinfo
Petition to reverse Comelec decision on Bongbong Marcos’ DQ case reaches SC
newsinfo
House energy committee chair Arroyo bats for cheap electricity
business
Luxe property: A way to build, preserve wealth
pop
Honolulu Café is the cure for your Egg Tarts and Roastings cravings
entertainment
Heart Evangelista gets a ‘no’ from Chiz Escudero after asking, ‘Do I deserve a bag?’
May 17, 2022
newsinfo
CebuPac places pilot under disciplinary review after ‘baseless’ post vs Robredo
May 17, 2022
newsinfo
Congress canvassing of votes for president, VP to begin May 24
May 17, 2022
newsinfo
PH needs P326 billion yearly to pay debts
May 17, 2022
newsinfo
Man posing as Marcos spox revealed to be an inmate in Bilibid — Guevarra
May 17, 2022
opinion
Leni and the future of the Pink Movement
May 17, 2022