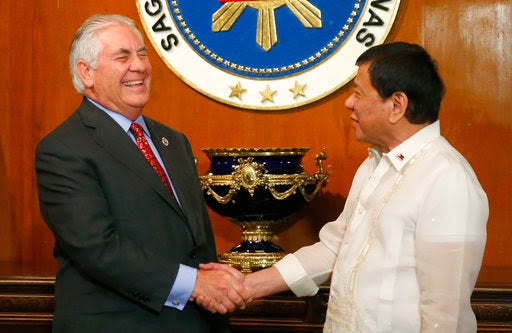 US Secretary of State Rex Tillerson found “common ground” with President Rodrigo Duterte during their meeting on Monday afternoon to discuss the “broadening cooperation” between Manila and Washington, Malacañang said on Tuesday.

Presidential spokesperson Ernesto Abella said the President and America’s top diplomat discussed in Malacañang various issues such as narcotics, the South China Sea, terrorism and the security situation in the Korean peninsula.

“President Duterte and Secretary Tillerson emphasized that PH and US have shared values that form the foundation for broadening collaboration,” Abella said.

“Both exchanged frank views on the South China Sea, Korean Peninsula and other regional developments,” he added.

Abella said Mr. Duterte and Tillerson had a comprehensive discussion on the “PH-US strong alliance and robust bilateral partnership, including the need to work together
to address counternarcotics, which is also a growing problem in the US.”

“Secretary Tillerson reiterated his country’s strong and sustained support for the PH’s fight against terrorism and offered their assistance for the rehabilitation of Marawi,” he added.

Besides meeting Tillerson, the President on Monday also met with Australian Foreign Minister Julie Bishop, and received the credentials of the new ambassadors of Chile, Colombia, India and Austria.

Meeting with the media after Tillerson’s courtesy call, Mr. Duterte noted that foreign governments had “considerably toned down” their expressions of concern about the human rights situation in the country.

“Mostly, they have considerably toned down on human rights. Mostly, it was terrorism but no one is asking me about human rights. Not anymore,” Mr. Duterte said.

The President had come under fire from Western countries for alleged extrajudicial killings in the government’s war on drugs.

However, the President was tightlipped when asked about the details of his meeting with Tillerson.

“They might want it confidential. We discussed so many things,” he said.