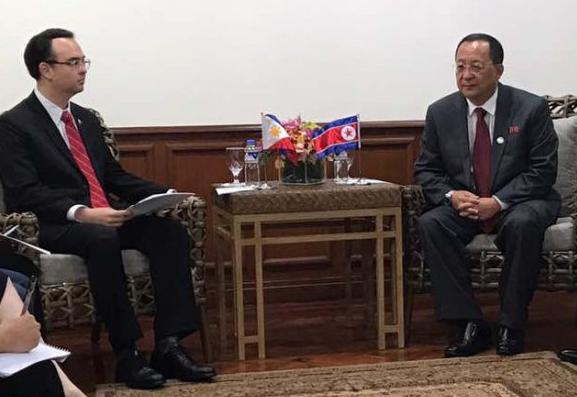 Philippine Foreign Affairs Secretary Alan Peter Cayetano conveys the Asean position on the situation in the Korean Peninsula to Foreign Minister Ri Yong-Ho of the People’s Democratic Republic of Korea on Monday, Aug. 7, 2017. (Photo from the Asean website)

President Rodrigo Duterte broached the idea of a dialogue with North Korea when he came face to face with its foreign minister, Ri Yong-ho, amid tensions over Pyongyang’s nuclear weapons program.

At the 50th anniversary celebration of the Association of Southeast Asian Nations (Asean) at the Philippine International Convention Center on Tuesday, Mr. Duterte shook hands with Ri and told him that he was pleased to have him here.

“We would be a good dialogue partner,” Mr. Duterte said.

Ri thanked the President before posing for a photo with him, Foreign Secretary Alan Peter Cayetano and Executive Secretary Salvador Medialdea.

North Korea’s nuclear weapons program and ballistic missile tests had been a contentious point in this year’s Asean Regional Forum (ARF) in Manila, which was attended by critics of the program, mainly the United States, Japan and South Korea.

Mr. Duterte recently went off against North Korean leader Kim Jong-un, describing him as a “fool” who was playing with “dangerous toys.”

Cayetano said the President’s reference to a dialogue with North Korea was in the context of the ARF.

“I didn’t hear everything they said. But what I do know is that the President welcomed the opportunity for a dialogue in the ARF,” said Cayetano, who was with the President when he greeted Ri.

The ARF was the only forum that the North Korean foreign minister attended.

In a news conference at the end of the three-day Asean and regional meetings, Cayetano said the Philippines did not want to mention China’s “land reclamation” and “militarization” in the disputed South China Sea in the joint communiqué issued by Asean.

“I did not want to include it. It’s not reflective of the present positions. They’re not reclaiming land anymore, so why put it there this year,” Cayetano said.

Cayetano, who chaired the meetings since the Philippines is this year’s Asean chair, said he accepted the position of “more than a majority” of his counterparts after intense discussions.

In their joint communiqué issued on Sunday, the 10 Asean foreign ministers called for “nonmilitarization and self-restraint” in the South China Sea and spoke out against “land reclamation” without mentioning China.

Cayetano said reclamation and military activities in the South China Sea, which is claimed partly by the Philippines, Vietnam, Malaysia, Brunei and Taiwan and wholly by China, involved not only China, but he did not mention other countries.