‘Glocalization’ of education rises in the Asean region 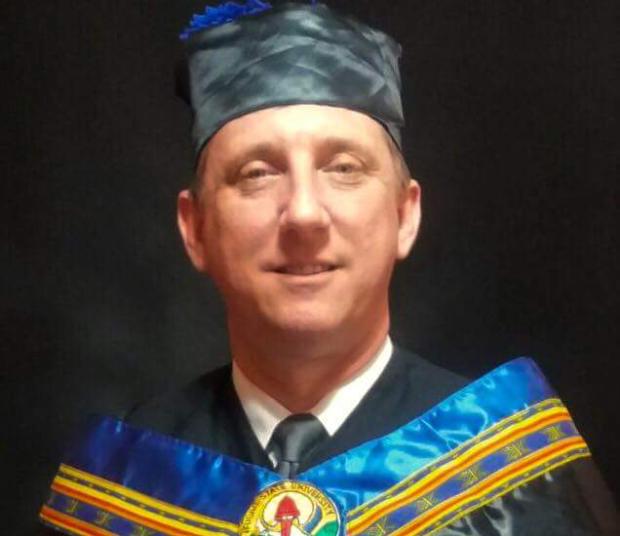 David Perrodin graduated from the Ifugao State University with a master’s degree in English Language Teaching.

David Perrodin, an American in his early 40s works as an English lecturer in Thailand. He married a Thai woman and eventually settled in the Philippines with a working visa. Since his undergraduate program is Theology he pursued a bachelor’s degree in Secondary Education, majoring in English, at Philippine Christian University (PCU).

This August, he will be conferred with a master’s degree in English Language Teaching from the Ifugao State University of the Philippines (IFSU).

Elmer de Luna, a Computer Science graduate and a former teacher in the Philippines, decided to pursue master’s degree because he knew that being an overseas worker, though he had been in Thailand for 12 years, would only be “temporary.”

“Nowadays most employers will not consider you for a position unless you possess a master’s degree. If the trend continues, within the next decade employers will be looking for individuals with doctorate degrees,” David explains.

David and Elmer are among the hundreds of foreign nationals, including Filipinos, in Thailand who are seeking higher education to be able to get licensed mainly to teach. They are the products of “glocalized” education.

In the education sector, glocalization is an approach where institutions from different countries agree to a tie-up – that is, sign a memorandum of understanding(MOU) – to share their expertise in different areas of knowledge. Through this, the locals and the migrants need not to travel abroad to get quality education which their home countries cannot provide.

“In Thailand, getting an MA or PhD is very expensive, unless you qualify for a scholarship,” says Josemari Cordova, a social science lecturer and Filipino graduate student at Nakhon Ratchasima Rajhabhat University.

The Asean Economic Community (AEC) is already in the process of transforming the region into common market. Education is included in the free flow of services.

CHED recognizes the need for partnering with universities abroad due to the demands of globalization.

Moreover, internationalization of education will enhance the capabilities of Filipinos so that they can compete in regional and global markets. Transnational education (TNE) extends its mandate to Filipinos abroad.

With a large number of migrants in the Asean region, glocals seek transnational education to fulfill their needs for higher education without having to travel back to their home countries. Presently, there are about 17,000 Filipinos in Thailand, excluding their dependents.

Prasert Pinpathomrat, president of Rajamangala University of Technology Thanyaburi (RMUTT), explains that Thai universities have been partnering with universities worldwide to keep their autonomy; improve research and technology; facilitate the exchange of students, staff, and faculty members; and most of all, enhance international visibility.

“In partnership, each university must be recognized by both governments,” he says. “We cannot partner with universities without accreditation from their government.”

Curriculum development is the most basic area of cooperation between two universities, according to Dr. Robert Galindez, CEO of the St. Robert’s Group of Companies, the marketing arm of PCU in Thailand.

St. Robert’s is the only recognized company by the governments of both the Philippines and Thailand to operate in transnational education services. The company, through its partnership with PCU and IFSU, gives educational services to more than a thousand foreign nationals and locals in Thailand.

“Offering of a double program/diploma is being considered, where a unified curriculum will be developed by both parties. Once implemented, the student when he graduates has the option of acquiring a single diploma or both. For example acquiring a diploma from both PCU and RMUTT by studying once,” Galindez explains.

Jayson Petras, a professor from the University of the Philippines and a language scholar at Chulalongkorn University, believes that aside from cultural, political and academic benefits of both countries, Thailand will benefit from the English language advantage of the Filipino students and lecturers.

Petras also says that it is also advantageous to the Philippine to collaborate with Thai universities because Thailand is the center of ASEAN studies in mainland Southeast Asia.

But transnational education is not without disadvantages, especially for labor sending countries like the Philippines.

The absence of opportunities and the declining economic situation in the country forced many Filipinos to migrate.

“Labor export has been a government policy since Marcos’s time,” Cordova explains. “For decades, OFW remittance keeps the economy afloat.”

Since the year 2000, Thailand has been a steady destination of the Filipinos seeking employment as English teachers.

However, most job seekers from the Philippines are classified as tourists. It is assumed that the 3,000 undocumented Filipinos on the record of the Philippine Embassy in Thailand in December 2015 were either tourists or workers with expired work permits or not issued with working visa.

As a labor sending country, the Philippines relies on overseas remittances to keep the economy afloat. Categorized as global work force, Filipino workers continue to seek personal development to remain competitive in their chosen fields to improve quality of life through income and livelihood, and job security.

Achieving higher education, accreditations and recognition from both the sending and receiving countries, are considered capital investments to continue working abroad.

Petras explains that Filipinos who benefited from transnational education, like exchange students and scholarship grantees, do not guarantee a “return of service.”

“Remittance is not a guarantee of a stable economy,” Petras says. “It is short-term. I don’t personally blame them for choosing to work abroad or to migrate. Majority of Filipino workers receive low salaries aside from inadequate government social services.” /atm