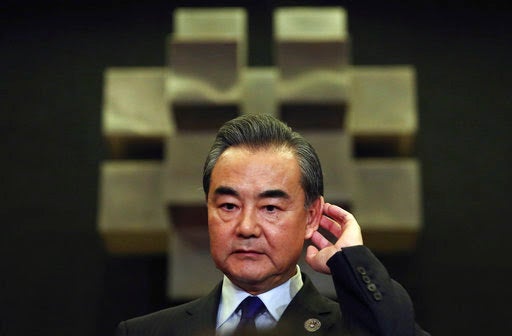 FILE – In this Sunday, Aug. 6, 2017, file photo, Chinese Foreign Minister Wang Yi gestures as he answers questions from reporters as he attends the 50th ASEAN Foreign Ministers’ Meeting and its dialogue partners in Manila, Philippines. The annual summit of Asia-Pacific nations delivered a reality check to Beijing over its claims in the South China Sea. (AP Photo/Aaron Favila, File)

MANILA, Philippines – With the rise of a friendly leader in the Philippines, China has been spared a vocal adversary in the disputed South China Sea. In the process, it has gained momentum despite last year’s ruling by an arbitration tribunal that invalidated its expansive claims in the disputed waters.

The rapprochement between President Rodrigo Duterte and his Chinese counterpart, Xi Jinping, defused a tense standoff between the Asian neighbors last year at the disputed Scarborough Shoal, where China allowed Filipinos back to fish in October as years of thorny relations began to brighten.

As President Donald Trump succeeded Barack Obama, who had challenged China’s assertive advances in the disputed sea, U.S. allies wondered if Trump would press America’s role as a regional counterbalance to the Asian powerhouse.

An annual summit of Asia-Pacific nations hosted by the Philippines over the weekend, however, delivered a reality check to Beijing.

U.S. Secretary of State Rex Tillerson met his Australian and Japanese counterparts on the sidelines of the meetings in Manila of the Association of Southeast Asian Nations, or ASEAN. After their meeting, they issued a joint statement that blasted aggressive actions in the contested offshore territories – without, of course, naming Beijing directly, in line with diplomatic practice.

Its top diplomat said that while his country and the 10-nation ASEAN bloc “all fully recognized that the situation in the South China Sea is showing signs of changes and things are moving toward a positive direction,” some countries outside the region “are not seeing the positive changes” and are holding onto a mindset that “still stays in the past.”

After the Philippines, ASEAN’s leader this year, hosted the first of three major summits of the bloc in April, Duterte issued a traditional chairman’s statement that dropped mention of contentious issues, including Beijing’s island constructions in disputed reefs that China has lobbied to be struck out of such high-profile communiques. For China, it was seen as a diplomatic coup.

Closeted in their annual gathering in Manila over the weekend, however, ASEAN foreign ministers wrangled over the tone and wordings to depict the territorial rifts involving China and five other governments in their joint statement, which unlike the chairman’s statement is a negotiated document.

A draft of the ASEAN ministerial statement seen by The Associated Press before it was finalized and made public provided a glimpse of the closed-door intramurals, with Vietnam insisting on stronger language against China’s increasingly assertive actions in the busy waters.

Vietnamese diplomats, for example, insisted on mentioning concern over “extended construction” in the contested waters. Cambodia, a Chinese ally, deferred a vote on the inclusion of worries over militarization.

The protracted quibblings delayed the statement’s release, two Southeast Asian diplomats told the AP. When it was issued a day later, the joint ministerial statement – surprisingly – mentioned land reclamation and militarization and, to Beijing’s certain dismay, carried a vague reference to the arbitration ruling: “full respect for diplomatic and legal process.”

Wang played down mention of the issues, including land reclamation, that critics have used to refer to China’s massive island constructions in the South China Sea.

The next battle is over a proposed “code of conduct,” which aims to stymie aggressive behavior in the disputed sea, including new construction and military fortifications. China concluded talks with ASEAN for a negotiating framework for the nonaggression code, a baby step both sides hailed as a milestone.

Most ASEAN states, including the Philippines, back a legally binding code. China wants otherwise and opposes mention of the contentious issues, including arbitration and a conflict-resolution arrangement, given its preference to solve the conflicts through one-on-one negotiation with its smaller rival claimants. With ASEAN unable to do anything unless it acquiesces to China’s wishes, it relented to reach a consensus. Proponents of the rule of law were dismayed.

The agreed framework “is a lowest-common-denominator effort. It lacks teeth because China has opposed making it legally binding and refused to include a dispute settlement mechanism,” said Bonnie Glaser, a senior adviser for Asia at the Washington-based Center for Strategic and International Studies.

“With ASEAN itself divided and China’s sway over individual ASEAN members growing,” Glaser said, “this is an unsurprising even if disappointing development.”

Wang announced at the Manila meetings that China would be ready to start negotiations for the maritime code when its leader travels to the Philippines and joins ASEAN heads of state in November.

But first, he said, in a shot at the United States, the situation has to be stable and free of “major disruption from outside parties.”

The United States, Australia and Japan immediately weighed in, urging China and ASEAN “to ensure that the code of conduct be finalized in a timely manner, and that it be legally binding, meaningful, effective, and consistent with international law.”

“Outside parties like the U.S. will do what they think is needed to promote peace and stability in the region,” Glaser said. “If China opposes those actions, so be it.”