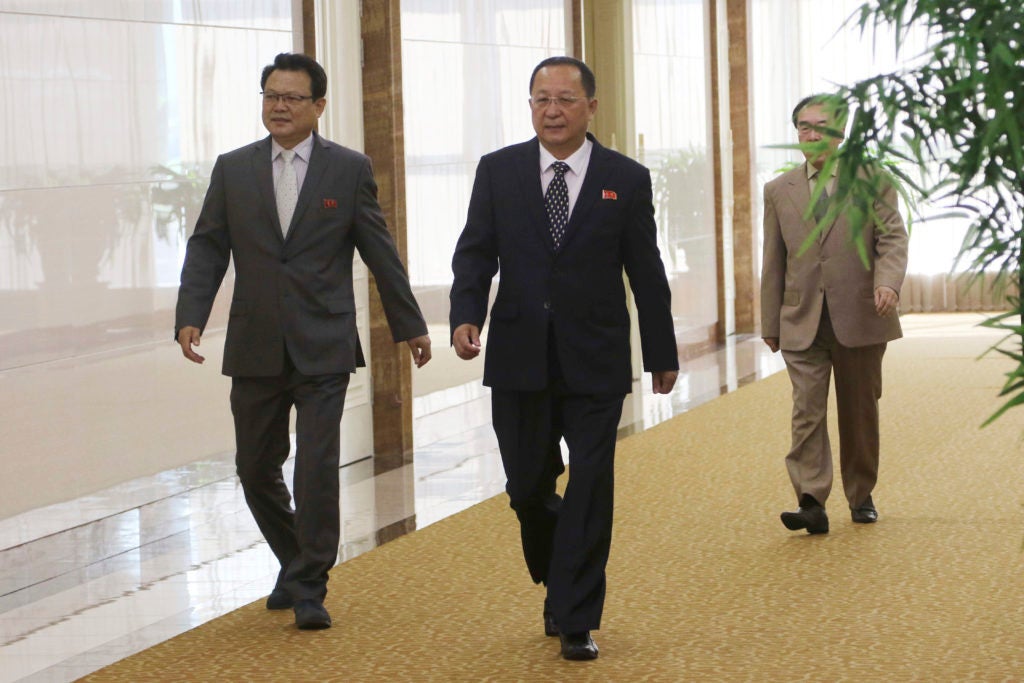 North Korean Foreign Minister Ri Yong Ho, center, walks as he leaves for the Philippines to participate in the ministerial meeting of the Association of Southeast Asian Nations, or ASEAN, Regional Forum, at the Pyongyang Airport in Pyongyang, North Korea, Saturday, Aug. 5, 2017. (AP Photo/Jon Chol Jin)

Duterte made the comment as he welcomed Ri during the 50th anniversary celebration of the Asean at the Philippine International Convention Center (PICC) in Pasay City.

“Your excellency, welcome. We are very pleased to have you here, Duterte told Ri as they shook hands minutes before the start of the program attended by Southeast Asia’s top diplomats.

Ri then extended his congratulations to Duterte, being this year’s chair of the Asean.

“Thank you for inviting me here. My warm congratulations on the 50th anniversary of the Asean,” Ri told Duterte in a live video from Radio TV Malacañang (RTVM).

Duterte then said that North Korea would be a good dialogue partner of the Asean.

“You are always invited here…We would be a good dialogue partner,” the President said.

It was not clear, however, if Duterte’s statement was an indication of an invitation to North Korea to be Asean’s dialogue partner.

The Asean foreign ministers, in a joint statement on Saturday, slammed North Korea for its intercontinental ballistic missile tests that may put at risk the peace and stability in the region.

But North Korea on Monday said its program for nuclear weapons and intercontinental ballistic missile is non-negotiable, chiding the Asean member states for rebuking the isolated communist country but not the United States for its “hostile policy” toward Pyongyang.

“What I do know is that the President welcomed the opportunity for dialogue in the Asean Regional Forum (ARF),” Cayetano said.

“It’s a common stand for Asean because the ARF is the lone opportunity for North Korea attends. My understanding is that we welcome them here, welcome to dialogue but it is in the sincere hope that they will only listen,” he added.

North Korea is not a dialogue partner of the Asean but is part of the Asean Regional Forum, which include Russia, Japan, the United States, China and South Korea.