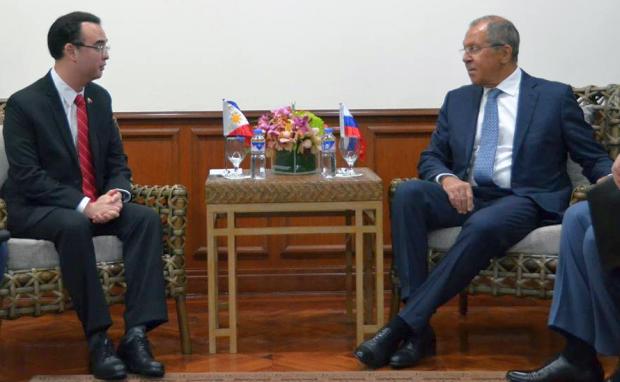 Russia has offered to assist the Philippines in boosting the anti-terrorism capabilities of its security forces and support the Duterte administration’s intensive drive against illegal drugs, Foreign Affairs Secretary Alan Peter Cayetano said on Tuesday.

Cayetano made this disclosure after meeting with Russian Foreign Minister Sergey Lavrov on the sidelines of the East Asia Summit Foreign Ministers Meeting at the Philippine International Convention Center on Monday.

“Minister Lavrov and I both agreed to fast track negotiations for pending bilateral agreements, particularly on military-technical cooperation, illegal narcotics, and law enforcement,” Cayetano said in a statement.

Cayetano thanked the Russian Federation for offering to help bolster the capabilities of the Armed Forces of the Philippines (AFP) and the Philippine National Police (PNP) in dealing with the threat posed by Islamic State-affiliate terrorist groups operating in Mindanao.

Russia’s offer, according to Cayetano, is of vital importance to country, “especially given its great expertise, vast experience and modern equipment in dealing with terrorism and other security concerns.”

The former senator said Lavrov wanted to convey to President Rodrigo Duterte Moscow’s “solidarity with his efforts to eliminate any extremist threat to your country and our appreciation for your solidarity with Russia’s fight against terrorism.”

Last May, Duterte met with Russian President Vladimir Putin at the Kremlin in Moscow. His visit was cut short, however, because of the clashes that erupted in Marawi City.

After being criticized for bringing with him a large delegation to Russia, including military and police officials, Duterte defended it, saying the Philippines got “nine billion of readymade transactions” anyway.

Defense Secretary Delfin Lorenzana and national security adviser Hermogenes Esperon were also there because they had to discuss arms and trade, Duterte said.

“We believe terrorism is something that must unite all of us,” Cayetano quoted Lavrov as saying.

According to Lavrov, the Russian Ministry for Civil Defense, Emergencies and Elimination of Consequences of Natural Disasters also pledged to send a cargo aircraft carrying relief assistance for displaced families in Marawi City.

The two foreign ministers also discussed trade and investment, education and research, and other areas of cooperation that the Philippines and Russia could explore.

Cayetano also stressed in the meeting that the Philippines would continue pursuing what he described as the “irreversible momentum” in Philippine-Russia relations as the Duterte administration would continue to implement independent foreign policy. /atm