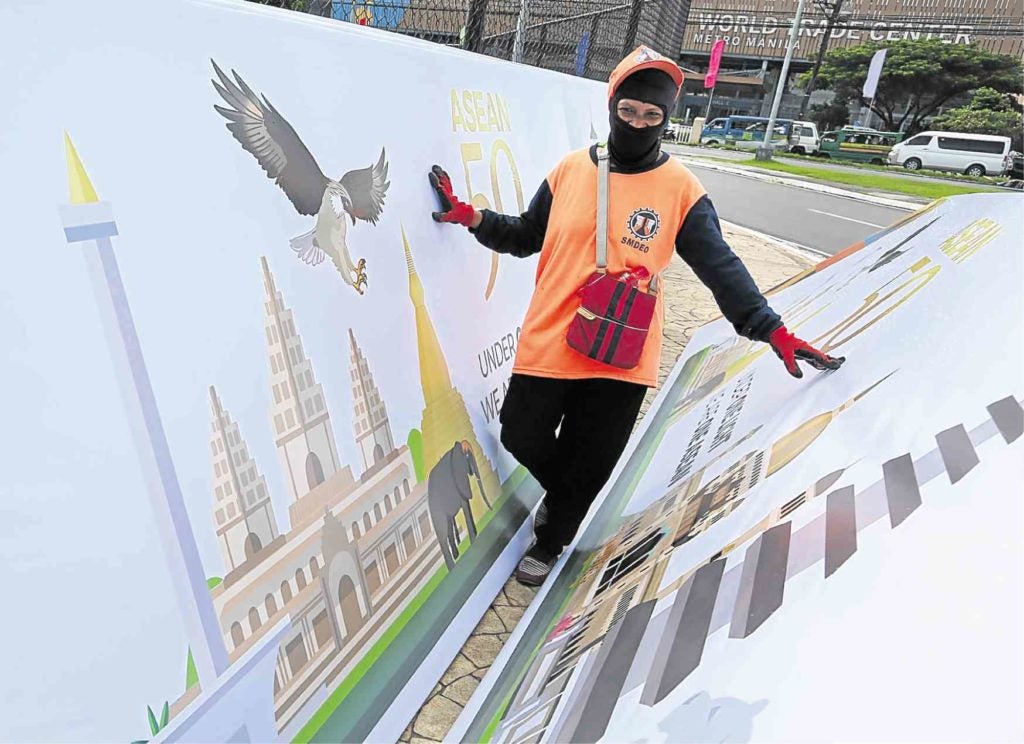 PREPARATIONS FOR ASEAN. Tarpaulins bearing the Asean logo are readied for installation at the CCP complex in Pasay City, venue of the 50th Asean Foreign Ministers Meeting on Aug. 2-8

North Korea’s top diplomat will join his counterparts from 26 other countries in a regional forum in Manila that is expected to tackle concerns over Pyongyang’s nuclear program, among other international issues, the Department of Foreign Affairs (DFA) said on Tuesday.

The South China Sea dispute and counterterrorism and violent extremism are also among the topics expected to be discussed by the Association of Southeast Asian Nations (Asean) Regional Forum, according to DFA spokesperson Robespierre Bolivar.

Participants will have “candid and free-flowing discussions” on regional and international issues, he said.

North Korea tested the Hwasong-14 ICBM on Friday but the failure of its reentry vehicle to survive the extreme heat and pressure after reentering Earth’s atmosphere following the launch suggested Pyongyang needed to conduct more tests of the missile to ensure the warhead could survive reentry from space and hit its intended target.

Analysis of the flight data from the Hwasong-14 test has suggested that more of the US mainland, including Los Angeles and Chicago, is now in range of Pyongyang’s weapons.

The United States, which is trying to work with China to rein in North Korea, has not ruled out military intervention to dismantle Pyongyang’s nuclear program.

Bolivar noted that South Korea, Japan and the United States have representatives to the Asean forum, who are expected to bring up North Korea’s nuclear weapons.

“Most likely they will raise the issue,” he said.

US Secretary of State Rex Tillerson will represent Washington at the Asean forum, which opens on Saturday.

Aside from the Asean Regional Forum, the Philippines is also hosting, beginning this week, the 50th Asean Ministerial Meeting and related meetings, which mark the regional bloc’s golden anniversary.

Some 1,700 important foreign visitors are expected to be in the country this week and up to next week for the Asean Ministerial Meeting and related meetings to be attended by foreign ministers.

President Duterte has been invited to the opening ceremony of the 50th Asean Ministerial Meeting on Saturday.

Cayetano will lead, together with the Canadian foreign minister, the Asean-Canada Postministerial Conference.  He will also participate in the postministerial conferences with other Asean dialogue partners.

He will also lead the Asean foreign ministers in discussions  with the Asean Intergovernmental Commission on Human Rights, and chair the meeting of the Southeast Asian Nuclear-Weapon-Free Zone Commission.

Bolivar said the foreign ministers would review the progress and future direction of the Asean community building efforts.

He said discussions for the conclusion of a code of conduct for claimants in the South China Sea were expected to begin after the approval of the framework, which the Asean and Chinese foreign ministers were expected to endorse at their meeting on Sunday.

The framework identifies the legal basis for the proposed code of conduct, including the principles of the law of the sea, and contains a statement on how claimants should behave, he said.

Bolivar said he had not seen the framework, but did not expect it to mention the Permanent Court of Arbitration’s July 12, 2016, ruling that invalidated China’s claim to almost all of the South China Sea.

The ruling also upheld the Philippines’ rights to fish and explore for resources in the West Philippine Sea, waters within the country’s 370-kilometer exclusive economic zone in the South China Sea.

Whether the Philippines would use the ruling during the writing of the code of conduct, Bolivar said the country would push anything that would promote its interests. —WITH A REPORT FROM AP