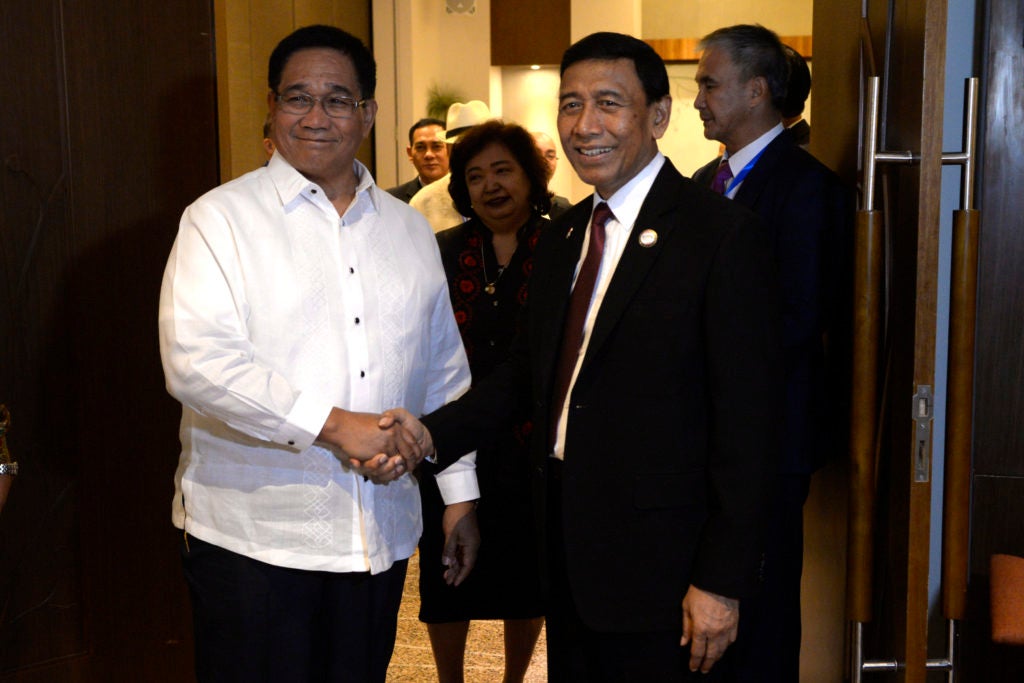 In this photograph taken on July 28, 2017 Indonesian’s Coordinating Minister for Political, Legal and Security Affairs Wiranto (R) shakes hands with Philipine national security adviser Hermogenes Esperon (L) before the one-day meeting on a counter-terrorism in Manado, North Sulawesi province, between six nations with Malaysia, Filipina, Brunei Darussalam, and New Zealand.
Indonesia and Australia are co-hosting a meeting on a counter-terrorism issues to address the rising threat of foreign fighters amid the ongoing battles by IS-pro militants in the Philippines. / AFP PHOTO / Raymon Komaling

Indonesia and Australia on Saturday co-hosted a counter-terrorism meeting to address the rising threat of foreign fighters, as the Philippines continue to battle pro-Islamic State militants holding up in Marawi City.

The one-day gathering in North Sulawesi brings together six countries including Malaysia, Philippines and New Zealand.

Ministers are due to discuss the challenges posed by growing terrorism in Southeast Asia as well as concerns that IS is trying establish a regional caliphate in the Philippines, where government forces are pitted against Islamist gunmen holed up in a southern city.

“I am hopeful that this meeting will produce a valuable outcome so together we could fight terrorism, especially in Marawi, Southern Philippines,” Indonesia’s chief security minister Wiranto told journalists late Friday ahead of the event.

Parts of Southeast Asia have long struggled with Islamic militancy, with hundreds of radicals from the region flocking to join IS in Iraq and Syria. JPV