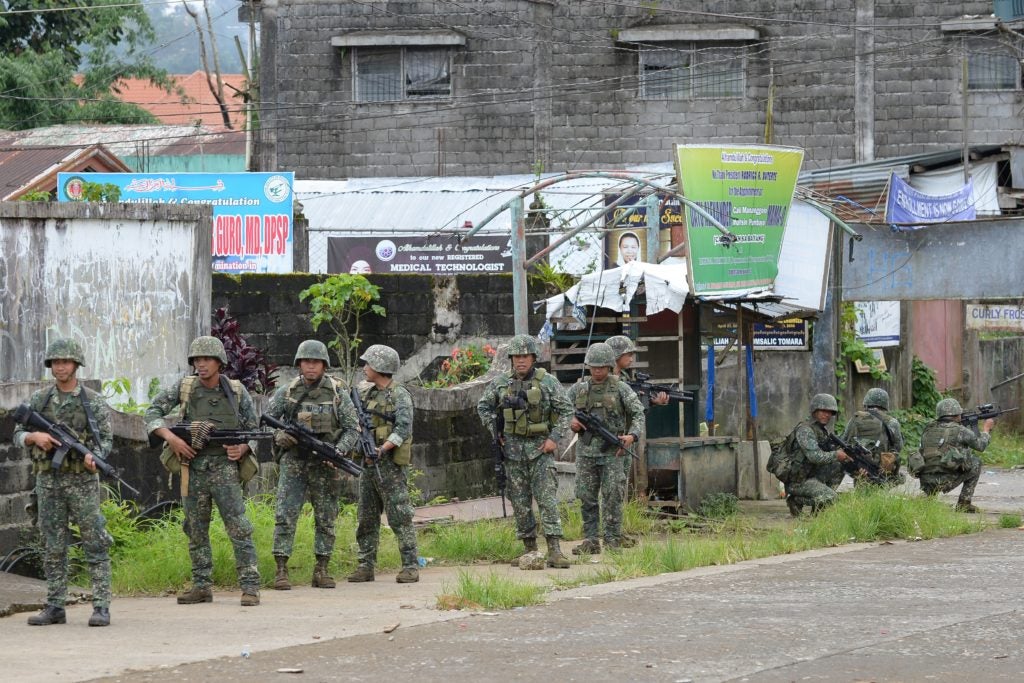 This photo taken on July 22, 2017 shows Philippine Marines patrolling a deserted street at the frontline in Marawi on the southern island of Mindanao, as fighting between government troops and Islamist militants enters its second month. AFP

Western governments are warning their citizens against travelling to nearly all of the southern third of the Philippines, citing the rising threats of terror attacks and kidnappings by Islamist militants.

Fresh alerts from Britain, Canada and Australia were released this week after President Rodrigo Duterte extended military rule across the southern region of Mindanao until the end of the year to combat the militants.

The Canadian advisory on Monday warned against visiting any part of Mindanao except for Davao, the biggest city in the south.

“There is a serious risk of terrorist attacks and kidnappings in this region,” the Canadian government said.

It also cautioned that people should only visit Davao, where the bombing of a crowded night market last year claimed 15 lives, if it was essential.

Mindanao comprises roughly a third of the Philippine territory and is home to 20 million people.

The region has endured decades of conflict, with Muslim separatists and communists waging deadly rebellions, and a small group of Islamic militants known as the Abu Sayyaf running a lucrative kidnap-for-ransom operation from there.

Western governments have long advised against travelling to parts of Mindanao, but the fresh alerts are more extensive as they warn against visiting almost the whole region.

The new advisories reflect growing concerns that the Islamic State group’s influence is rising in Mindanao.

Gunmen who have pledged allegiance to IS occupied Marawi, the main Muslim city in the southern Philippines, in May and security forces have been unable to dislodge them despite fierce battles that have claimed more than 600 lives.

The British government advisory, released on Tuesday, warned terrorists were “very likely” to carry out attacks anywhere in the Philippines, including the capital of Manila.

It said the most acute threat was in the south, and warned against travelling through nearly all of Mindanao.

The British advisory said the threat of kidnappings and terrorism also loomed over the central city of Dumaguete and nearby Siquijor island, both tourist areas.

The Australian government warning largely echoed those issued by Britain and Canada.

In a July 18 advisory that warned against travelling to Mindanao, the US embassy in Manila said it had “credible information” that terrorists also planned to conduct kidnappings on the tourist islands of Palawan, Cebu and Bohol in 2017.