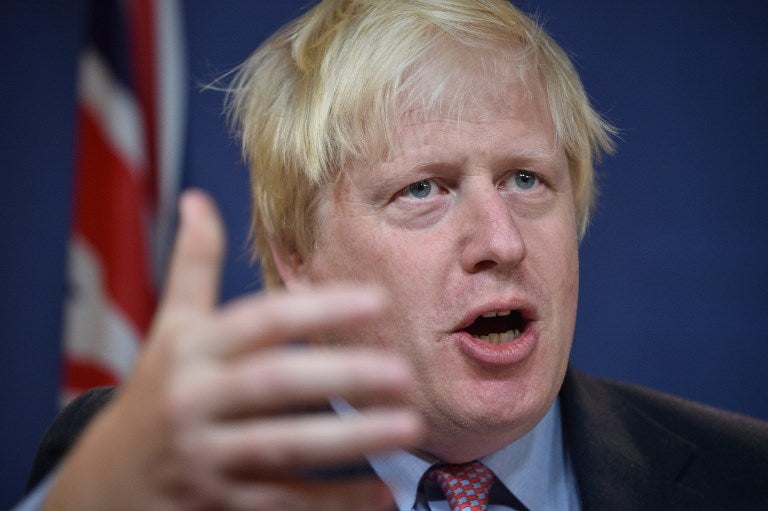 Britain’s Foreign Secretary Boris Johnson speaks during a press conference in Sydney on July 27, 2017. Britain plans to play a bigger role in Asia after Brexit, including deploying aircraft carriers to the region, Johnson said on July 27. AFP

Johnson backed the campaign to quit the EU and said the decision had given his country the opportunity to “think afresh” about its international role, while maintaining close ties with its European partners.

“People want the involvement of a country that sticks up for a rules-based international system, that is prepared to deploy its military in the area, as we are.”

After attending annual talks in Sydney between the British and Australian foreign and defence ministers, Johnson added that one way his nation would be “stepping up” in the region would be through supporting freedom of navigation.

“You will have seen last year how we sent a squadron of typhoons to Korea and Japan,” he told reporters later Thursday.

“One of the first things we will do with the two new colossal aircraft carriers that we have just built is send them on a freedom of navigation operation to this area.”

The comments came as British Defense Secretary Michael Fallon made a pitch to build Australia’s next fleet of warships, with Spain and Italy also in the running for the lucrative deal to construct nine frigates.

The big increase in defence spending follows Beijing’s assertion of its regional power status through a military build-up in the contested South China Sea.

China asserts sovereignty over almost all of the resource-rich waters despite rival claims from Southeast Asian neighbors and has rapidly built reefs into artificial islands capable of hosting military planes.

“What people need is certainty and stability. We believe that legal certainty in the South China Sea is hugely important,” Johnson added to The Australian.

“We don’t want to see the militarization of that area. We believe that for world trade to prosper there must be a fairness about the way sea lanes are going to operate.”

Another key issue discussed during the meeting was a free-trade agreement with Australia post-Brexit, with Johnson stressing that Britain’s greater regional military involvement went hand-in-hand with an economic pact.

“The increase in our defence budgets that Michael Fallon has alluded to do allow for the UK to step up in this region,” Johnson told reporters.

“The change in our circumstances in our relationship with the European Union also allow us now to do a big free trade deal with Australia. The two things go together.

“We believe that it is the guaranteeing of the rules-based international system, the preservation of the security and stability of this region, that allow for economic growth.”