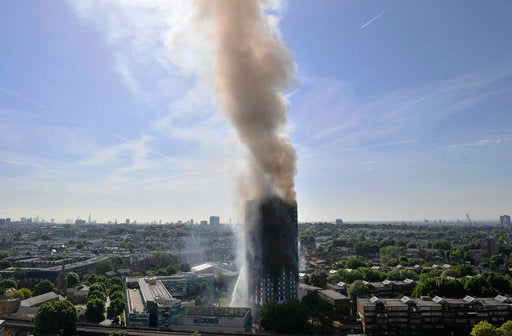 Smoke billows from a fire that has engulfed the 24-storey Grenfell Tower in west London, Wednesday June 14, 2017.  (Victoria Jones/PA via AP)

A number of Filipinos were injured and taken to the hospital after a massive fire destroyed a 27-storey building in London.

The Department of Foreign Affairs on Thursday (Manila time) said the Philippine Embassy in the United Kingdom confirmed that “there were Filipinos who were taken to the hospital for treatment of injuries” because of the Grenfell Tower fire in west London.

The agency said representatives of the embassy have already visited them.

“A number of fatalities have been reported.  At the moment, however, there is no report of Filipino fatalities.  The identities of the fatalities will only be known once the authorities release details,” the DFA said in a statement released on Thursday afternoon.

Meanwhile, Presidential Spokesperson Ernesto Abella said, “We condole with those who have lost families and friends in the Grenfell fire and we take special note on the special needs of Filipinos who were also affected by the conflagration.”

DFA Spokesperson Robespierre Bolivar said they still do not have the exact number of Filipinos injured in the fire as London authorities have yet to release update information.

International news agencies reported  that the death toll has risen to 12 and that the police expect the number to increase.

“Filipinos living near the Tower have also been advised not to go back to their homes until the situation stabilizes,” the DFA said.

The embassy, in its Facebook page, called on the public to help find Ligaya Moore, a resident of Grenfell Tower.

There are more than 3,000 Filipinos living in the borough of Kensington and Chelsea in west London, according to the embassy.

It also reported that a number of the Filipinos affected by the fire are in emergency shelters at St. Clement’s Church, the St. Francis of Assisi Church and the Portobello Rugby Club on Walmer.

The Philippine embassy is said to be closely monitoring the situation and  providing assistance to Filipinos affected by the fire.

It posted photos of Filipino volunteers distributing food to victims of the fire.