The Duterte administration turned down 250 million euros worth of development aid from the European Union (EU) because it “may be used as the reason for interfering in the internal affairs of the country,” a Cabinet official familiar with the issue said.

The high level source, who only agreed to speak under anonymity, told the Inquirer that the move aims to block the EU from questioning how the Philippines adopts and follows the rule of law, including respect for human rights.

The EU Delegation to the Philippines on Thursday said that they were informed of the government’s decision to turn down the grant during a meeting on Wednesday.

However, they have not received any written confirmation of the decision. An EU delegation representative told INQUIRER.net that they will have to check which projects will be affected. The representative explained that the grants are usually coursed through the Philippine government, which also provides and counterpart funds.

This developed as a wires report said on Wednesday that the Philippine government told the European Union it would no longer accept development aid from the bloc, days after Duterte’s second visit to China.

“I believe it is in adherence to this administration’s independent foreign policy, that the President is compelled to decline the new offer of assistance from the EU, which may be used as the reason for interfering in the internal affairs of our country,” the source said.

“While we have always adopted and followed the rule of law and respected  human rights, the inclusion of those conditionalities will allow certain sectors within the EU community to continuously interfere or question our government on these matters,” the source added. 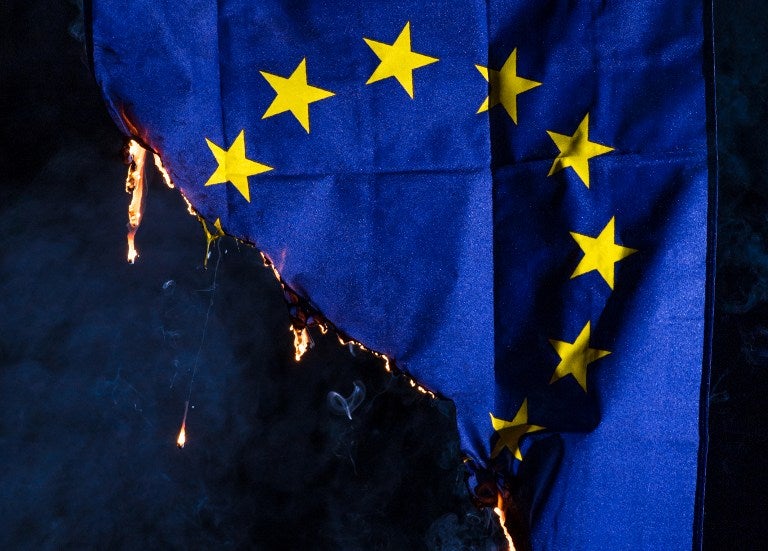 A photo-illustration shows a European Union (EU) flag as it burns near Manchester, northern England on March 25, 2017, ahead of the British government’s planned triggering of Article 50 tomorrow. AFP FILE PHOTO / Oli SCARFF

It remains to be seen how the government would compensate for the development aid it would lose, which would have primarily gone to the poorest communities in Mindanao.

When asked for the explanation behind the rejected development aid, EU Ambassador Franz Jessen told the Inquirer in a text message that “human rights were mentioned.” He did not expound.

President Rodrigo Duterte has been at odds with EU leaders for his anti-crime efforts, which stood at the receiving end of criticisms for the apparent lack of respect for human rights as the number of casualties pile up to reach the thousands.

“Our government simply wishes to have independence from foreign interference and would simply welcome the support of the international community in its fight against illegal drugs, corruption and criminality without any condition,” the cabinet official said.

Duterte was in China on May 14 and 15 for his participation in the Belt and Road Forum for International Cooperation.

In his bilateral meeting with Chinese President Xi Jinping on May 15, he brought home four agreements.

This included an agreement to implement a RMB 500-million grant to conduct feasibility studies for major projects, including the construction of the drug abuse treatment and rehabilitation center and bridges crossing the Pasig River, according to the Presidential Communications Operations Office. With a report from Kristine Angeli Sabillo/CBB