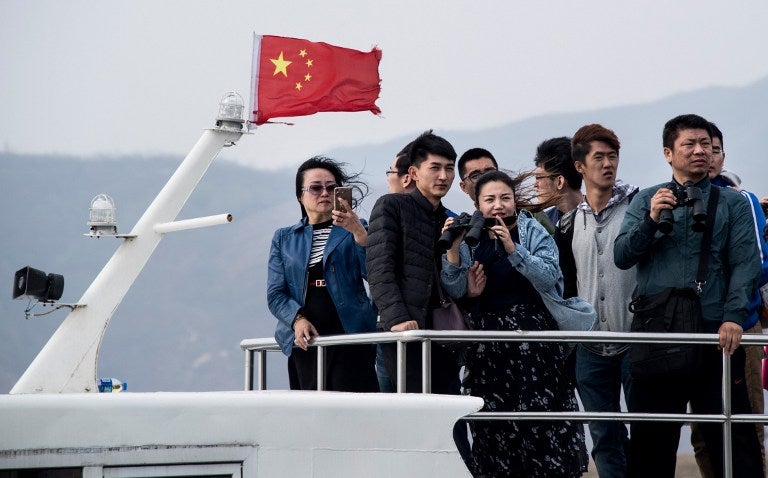 Chinese tourists try to catch a glimpse of North Korean soldiers from a boat on the Yalu river near Sinuiju, opposite the Chinese border city of Dandong, on April 16, 2017. For years, Chinese tourists have avoided going to the Philippines but better ties between the two countries have resulted in a 200 percent rise in the number of Chinese seeking visas to visit the Philippines, according to Manila’s envoy to Beijing. AFP

BEIJING, China — The Philippine embassy here has recorded a 200 percent increase in visa applications among Chinese tourists and businessmen wanting to visit the Philippines.

Philippine Ambassador to China Jose Santiago Sta. Romana said the Chinese government had lifted all travel advisories on the Philippines.

Sta. Romana said there was a huge decline in Chinese tourists visiting the country “before we resolved the underlying issues in the South China Sea.”

The envoy said “the new foreign policy” and the “friendly approach” of President Rodrigo Duterte have helped tourism in the country.

“China, right now, constitutes a big demand of visas because of the boom in tourism and in business travel,” he said. “We will hit one million arrivals this year.”

He said consular offices in China were being deluged with visa applications from Chinese nationals.

Meanwhile, a 25.42 percent increase in the number of tourist arrivals was recorded from January to February 2017 compared to the same period in 2016.

Duterte visited China on May 13-15 to attend the two-day One Belt, One Road Forum where he had a bilateral meeting with Chinese President Xi Jinping. CBB

ADVERTISEMENT
Read Next
PH spurns EU interference, rejects 250-M aid — official
EDITORS' PICK
Cherry Mobile teams up with Cloud Panda PH, launches online store
Someone from the Philippines can become $356 Million richer this Tuesday
Philippines’ COVID-19 cases accelerate to 18,638
Duterte certifies as urgent anti-terror bill
Leveling up your ‘lutong bahay’ with the kitchen companion you never knew you needed
‘Puno na lahat:’ Metro workers brave lack of public transport, rains on Day 1 of GCQ
MOST READ
‘If I had not been SolGen, I will make you eat your words,’ Calida tells Coco Martin
5 car dealership outlets shutting down
Quarantine passes no longer required under GCQ, but curfew remains
51 percent of German firms holding back investments in PH, but not because of COVID-19
Don't miss out on the latest news and information.