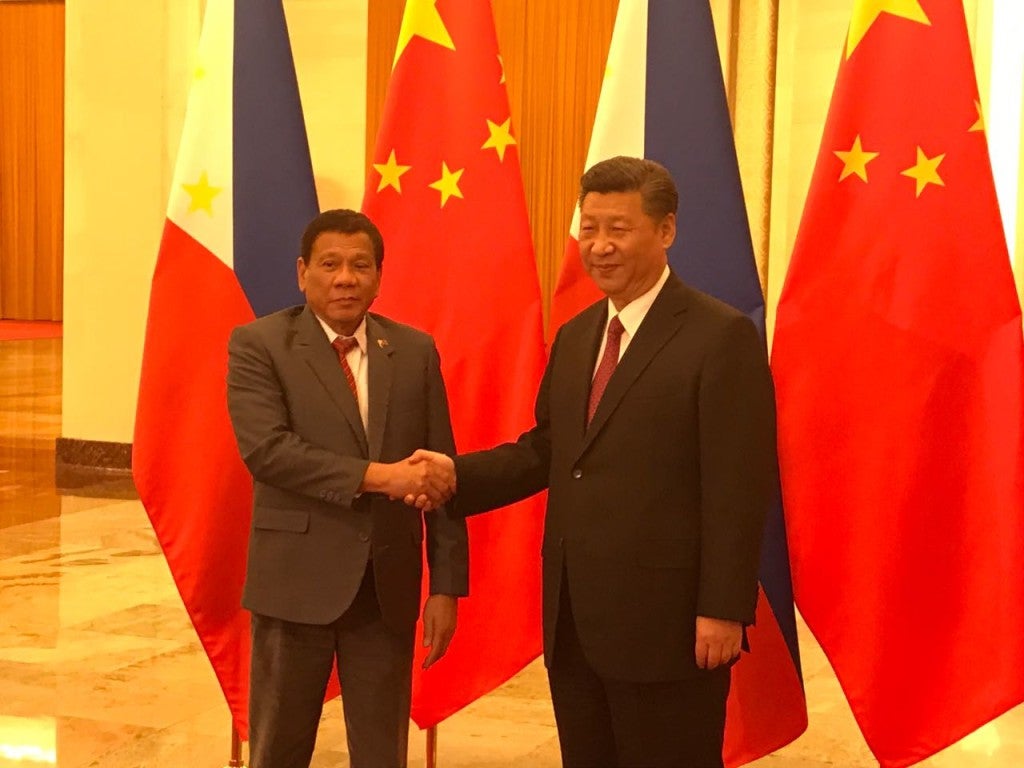 BEIJING – President Rodrigo Duterte on Monday assured President Xi Jinping that the Philippines would be “engaging peacefully” with China over the maritime dispute in the South China Sea.

Duterte and Xi held bilateral talks at the Great Hall of the People after the two-day Belt and Road Forum here.

Duterte said the Philippines and China would start its bilateral talks over the sea dispute on May 19.

“It is important to keep our communication lines open. I am pleased that we have established a bilateral consultation mechanism on the South China Sea. This is one step forward toward peacefully engaging disputes and I hope the inaugural meeting will be a success,” Duterte told Xi.

Manila and Beijing have strained relations after China’s expansive reclamation in the South China Sea was protested by the Philippines at the United Nations-backed arbitral tribunal.

“But we must certainly continue to strengthen our bilateral relations,” Duterte said.

“I am pleased to be back in China to renew our positive ties of friendship,” he added.

He said he was “eager to discuss positive ties of further expanding and deepening bilateral cooperation.”

Duterte said the “valued friendship” between the Philippines and China has become stronger.

For his part, Xi said the relations between the Philippines and China have improved since Duterte’s state visit in October 2016.

The Philippines and China are scheduled to have bilateral talks on the “sensitive” issue of the South China Sea this week.

The two leaders also witnessed the signing of signing of four memorandum of agreements.

(The Agreement will serve as the basis for the grant to be provided by China to the Philippines, to implement the grant of RMB 500,000,000 (Five Hundred Million Renminbi Yuan only) to conduct feasibility studies for major projects, construction of the drug abuse treatment and rehabilitation center and bridges crossing the Pasig River, and other projects agreed by DOF and the Ministry of Commerce (MOFCOM) of the People’s Republic of China.)

(The MOU will serve as the framework for the Philippines and China to strengthen cooperation in human resource development and promoting personnel exchanges by Neda and MOFCOM.)

(According to the Department of Energy, the objective of the MOU on Energy Cooperation between the Philippines and China is aimed at strengthening cooperation between the two countries in the electric power, oil and natural gas sectors, and others, as mutually agreed by DOE and the National Energy Administration of the People’s Republic of China.)

(The MOU aims to serve as an implementing agreement between the Philippines and China based on the Memorandum of Agreement between the Presidential Communications Operations Office of the Government of the Republic of the Philippines and the State Council Information Office of the People’s Republic of China on News and Information Exchange, Training and for Other Purposes, which was signed in Beijing on 20 October 2016 during the President’s state visit to China. The objective of cooperation under the MoU is for both parties to enhance their capabilities in the field of international communication and publishing, to undertake joint or individual activities and programs that help strengthen cooperation between news organizations under the parties, the PCOO and the State Council Information Office.)