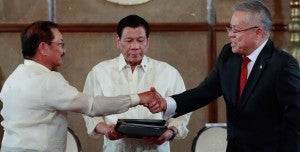 President Rodrigo Duterte presides over the signing of a memorandum of agreement between Agriculture Secretary Emmanuel Piñol (left) and Trade and Industry Secretary Ramon Lopez at the Rizal Hall in Malacañan Palace on March 7, 2017. (TOTO LOZANO/ Presidential Photo)

MANILA — Trade and Industry Secretary Ramon M. Lopez lauded the opening of the Belt and Road Forum (BRF) on Sunday, noting how globalization has received wide public support among state leaders and heads of international organizations amidst growing fears of protectionism.

Lopez told reporters on the sidelines of the forum that the leaders participating in the BRF signalled how economic prosperity should go beyond one’s regional borders.

“The good principle they’ve been mentioning several times is mutual benefit of all stakeholders, shared prosperity basically to all the players. Its not only about Asean. It’s beyond Asean,” he said.

China is hosting the BRF for International Cooperation on May 14 and 15, inviting delegates from around 60 countries and international organizations including 29 state leaders.

The forum celebrates the Belt and Road Initiative, an ambitious long term project launched by Chinese President Xi Jinping in 2013 in a bid to link parts of Asia, Europe, and Africa through different forms of infrastructure connectivity.

The participation of the Philippines in the forum has been seen by many as another sign of improving ties with China, after the relationship went on the rocks due to disputes over the South China Sea.

The Duterte government has favored a dual approach to China, separating their economic cooperation from the political climate surrounding the disputed waters — a strategy which has led to commitments that promise to boost two-way trade and investments.

In March, Philippine and Chinese trade officials signed the summary of discussions for the 28th Philippines-China Joint Commission on Economic and Trade Cooperation (JCETC), signalling renewed interests after a five-year hiatus that began when tensions were high over the South China Sea.

Lopez reiterated the economic perks that the Philippines received from China such as the $24 billion worth of commitments and loans that President Rodrigo Duterte brought home during his first state visit to the country last October.

The Department of Foreign Affairs echoed Lopez, noting that the initiative would lead to mutual benefits.

“The Philippines hopes that the One Belt One Road Initiative could be one of the international cooperation initiatives that will contribute to our shared benefit. For the Philippines, connectivity projects should complement and support Philippine development priorities, the Philippine Development Plan, the President’s 10-point socioeconomic agenda, and the ASEAN Master Plan on Connectivity,” the statement read.

Since President Xi Jinping launched the ambitious project, 65 countries representing 60 percent of the world population and around a third of global gross domestic product have participated in the initiative. The Philippines, however, is not yet part of the initiative.  SFM

Read Next
Extend China’s Belt and Road Initiative to Latin America, Australia – JDV
EDITORS' PICK
DOH: Too early to say COVID-19 cases are declining
Duterte praises military but slams police for poor discipline, corruption
Acer starts the year off strong with the Aspire Vero National Geographic Edition
The best of bayside and city living at SMDC’s Sail Residences
COVID-19 cases surging in all regions and provinces, says DOH
Over 3 Million worth of prizes to be won at Smart Padala’s SENDali Manalo Promo!
MOST READ
Marcos Jr. visits Cebu, stands as ‘ninong’ to mayor’s son
Duterte praises military but slams police for poor discipline, corruption
Djokovic has to comply with rules to go to Spain, PM says
Comelec junks petition to scrap Bongbong Marcos COC
Don't miss out on the latest news and information.