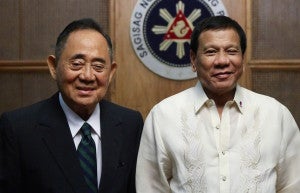 Former House Speaker Jose de Venecia Jr. (left) poses with President Rodrigo Duterte for a photo during a meeting at the Study Room in Malacañang on March 7, 2017. (PHOTO BY RICHARD MADELO / Presidential Photo)

BEIJING — The Philippines’ Special Envoy Jose de Venecia Jr. called for a third route in the belt and road initiative which would pass by the Philippines, making the China-led project “almost globally inclusive” since it would add two more continents — Latin America and Australia —  to its already massive scope.

De Venecia made this statement during the Belt and Road Forum for International Cooperation here where he represented the Philippines during the opening ceremony of the two-day event.

The Belt and Road Initiative, inspired by the ancient route, would link parts of Asia, Europe, and Africa through various infrastructure connectivity projects.

“In order to expand, deepen, and strengthen the cultural, geopolitical, economic trade, and people to people relations of the historic silk road, what we propose [is] consideration also for the development of a third route to complement and extend china’s great
belt and road initiative.”

From Southern China, the route would pass through the Philippines, Malaysia, Indonesia, and Timor Leste, which would then lead to parts of Austalia and Latin America, he said.

He did not clarify if this would have to pass through the South China Sea, currently being disputed among a number of member states of the Association of the Southeast Asian Nations (Asean) as well as China.

This echoes the strategy of the Duterte government which decided to treat the dispute as a separate track from its economic ties with China while promising not to abandon the country’s rights over a part of the disputed waters.

“The proposed 21st century third route hopefully an enlargement of the silk road of china will make China’s celebrated belt and road initiative almost globally inclusive and create a linkage with two more continents Australia and Latin America,” he said.

The suggested third route, which he described as a “new spirit in the age of globalization,” would be in addition to the Maritime Silk Road and the Silk Road Economic Belt — the two main components of the Belt and Road Initiative.

Since Chinese President Xi Jinping launched the ambitious project in 2013, 65 countries representing 60 percent of the world population and around a third of global gross domestic product have participated in the initiative.

The forum has been described by some local and international top officals as a sign that the global power is shifting from its previous center of gravity in the West to the East.  SFM