Duterte to meet with 5 Chinese companies in Beijing 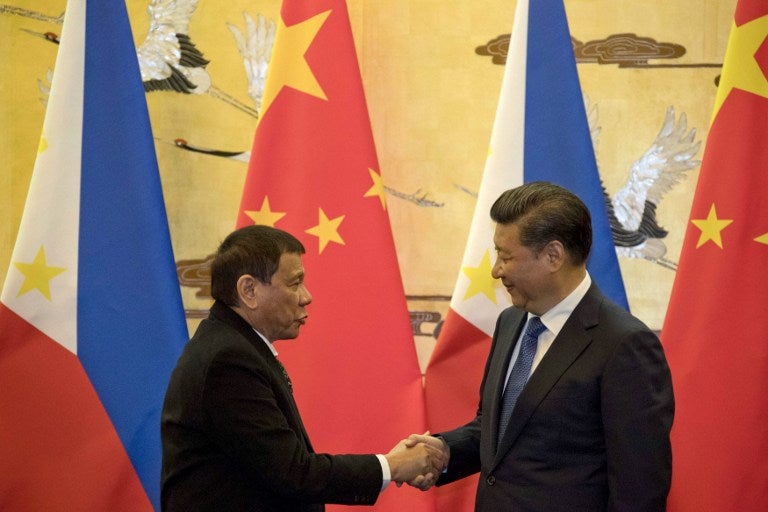 BEIJING — President Rodrigo Duterte has been scheduled to meet on Sunday with five Chinese companies, some of whom have made commitments to invest in Philippine infrastructure during his state visit in China last October.

This was according to the updated schedule of meetings for May 14 provided to the media, which coincided with the first leg of the Belt and Road Forum for International Cooperation here in Bejing.

“They will explore doing investment in the Philippines,” said Trade and Industry Secretary Ramon M. Lopez in a chance interview with reporters prior to the meetings.

This comes months after President Duterte made his first state visit to China in October, signalling a shift in Philippine foreign strategy, with the Philippine government now seeking the support of non-traditional allies such as China.

Last October, President Duterte brought home $24 billion worth of investment commitments and loans, a bulk of which was attributed to pledges made by the private sector.

As of this writing, Malacañang had not commented on the details of the meeting. However, Lopez previously said that one of the main objectives of Duterte’s participation in the event would be to follow-up on some of the commitments earlier made in China.

“I’m not sure if all of them are included [in the commitments last October]. Some of them are new. I just heard of them now,” Lopez said in Filipino. He did not participate in the courtesy call with the companies since he joined one of the plenary sessions in the Belt and Road Forum.

Upon checking the list of companies that made pledges in October, only Cavitex Holdings, China Railway, and China Harbour — a company previously blacklisted by the World Bank — were part of the earlier commitments.

The remaining firms listed have not yet pledged to any projects under the Duterte government.

Cabinet officials would be holding a Dutertenomics forum in Beijing on Monday in a bid to further attract more interest from Chinese companies that may invest in the Philippines.  SFM