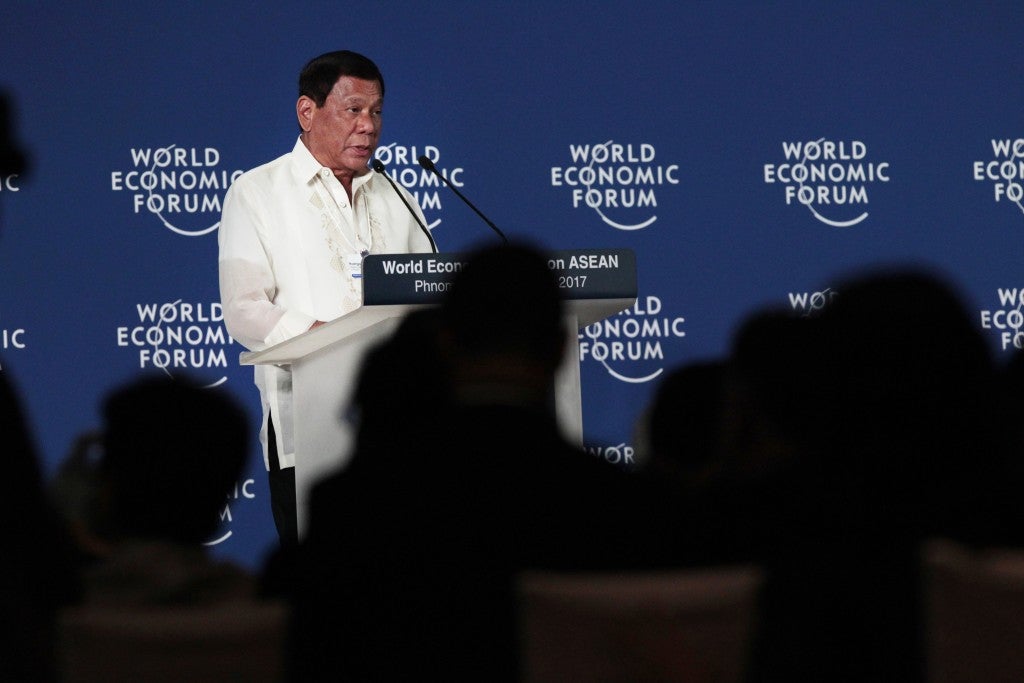 Philippine President Rodrigo Duterte delivers a speech during an opening of the World Economic Forum on ASEAN, in Phnom Penh, Cambodia, Thursday, May 11, 2017. AP

PHNOM PENH—Unperturbed by global criticism of his brutal war on drugs, President Duterte on Thursday called for an “integrated, drug-free Asean community” as his Cabinet officials sought to ease fears that the crackdown on narcotics had made the Philippines a dangerous country.

Addressing the World Economic Forum on Asean here, Mr. Duterte, this year’s chair of the Association of Southeast Asian Nations (Asean), focused on how the regional bloc could achieve inclusive growth and economic integration.

As in most of his speeches, Mr. Duterte called attention to the “scourge of illegal drugs that threatens our youth and the future of our societies.”

Then he called for commitment to make Southeast Asia a drug-free region.

“We need to take a committed stand to dismantle and destroy the illegal drug trade apparatus,” he said, emphasizing the need to keep the youth away from drugs. “We must reaffirm our commitment to realize a drug-free Asean community.”

Earlier on Thursday, however, Mr. Duterte’s Cabinet officials found themselves answering questions from journalists about the killings of  thousands of people in his war on drugs and whether the crackdown had scared away foreign investments.

The forum came four days after 45 of the 47 member states of the United Nations Human Rights Council (UNHRC) demanded an end to extrajudicial killings in Mr. Duterte’s war on drugs during a review of the Philippines’ human rights record in Geneva.

Many of the council members sought an international investigation of the killings.

After their brief presentation on how the Duterte administration planned to achieve a high middle-income status for the Philippines in the next six years, a German journalist asked them  how the war on drugs “might lead to lesser foreign direct investments.”

Frederic Spohr, a Thailand-based correspondent for the German newspaper Handelsblatt, said German businessmen were worried about the war on drugs and the rule of law in the Philippines.

Spohr later told the Inquirer that he had written a report  about how chambers of commerce in Germany cautioned businessmen about investing in the Philippines because of the perception of instability.

Repeating his remarks in the UNHRC review in Geneva on Monday, Cayetano gave assurance that “the protection of human rights is paramount” for the Philippine government and that “the campaign against drugs is a campaign to protect the human rights” of the Filipinos.

He accused the international media of not showing the full picture in their reports on Mr. Duterte’s war on drugs.

“They only show the rhetoric of the President when he is mad at certain criticisms against the Philippines,” Cayetano said. “They don’t show the statements where he says, ‘Police cannot abuse and that they are worse than criminality.’”

He said only close to 3,000 people had been killed in drug-related police operations and that the higher numbers reported by the media referred to “homicides.”

“For those of you who are hearing that there are 7,000 deaths in the Philippines, that’s not true,” he said.

Come to the Philippines

Cayetano invited the foreign journalists to visit the Philippines to see things for themselves.

Lopez claimed that the crackdown on narcotics had resulted in a sense of safety in Philippine communities.

He also claimed that business and consumer confidence had gone up.

Moderator Adrian Monck asked the Philippine officials about how Mr. Duterte had been “incredibly outspoken” and how such “rhetoric” had drawn support from some investors but also resulted in the “alienation” of others.

Cusi responded, but did not answer the question directly, instead saying that the Philippines was “a nation  in a hurry to improve the lives of Filipinos.”

Lopez said the Duterte administration was not focusing on drugs.

“That’s why we are having Dutertenomics,” he said. “Peace and order has to be the basic foundation.”

Pernia said Dutertenomics was about “building fast, on schedule and getting things done quickly because the President is impatient and so are the ministers.”

The Philippine officials said an investment of $160 billion would enable the Philippines to achieve a high middle income status by the end of Mr. Duterte’s term.

They said the Philippines could eliminate poverty and become one of the 30 largest economies in the world “within a generation.”

“We expect clarity on the part of the international community to banish misconceptions,” Pernia told the Inquirer later.

Asked how the briefing for investors went, he said, “Nothing is perfect and no briefing or examination is perfect.”