‘Incroyable’ Aliènette Coldfire returns to Paris with a concert 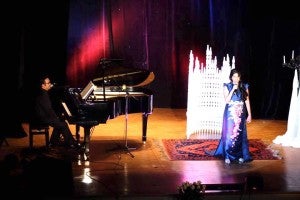 PARIS — Four months since Aliènette Coldfire (Katchry Jewel Golbin) in real life landed third in the 11th season of “La France a Un Incroyable Talent “(France Has Incredible Talent), the blind singer made a powerful comeback in Paris through a moving two-hour performance.

Hundreds of Filipinos and locals watched the concert as Aliènette once again moved the audience to tears.

“I understand now why whenever she sings Helene Segara, the female judge of Incroyable Talent, ends up crying. She sings with all her soul and is full of sincerity. There’s something in her voice that’s magical.!” exclaimed one of the organizers of the concert. 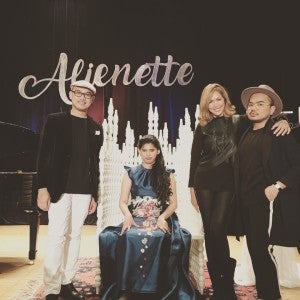 A French family traveled all the way to Paris from Toulouse, the capital of France’s southern region, to watch Aliènette’s concert. “It’s a perfect show. We have a lot of emotions,” says the head of the Rongere family. His wife and three children adore Aliènette.

Aliènette received a standing ovation. Erick Baux, a pianist from Lille and townmate of the reigning Miss Universe Iris Mittenaere, looks forward to playing for Aliènette. “It’s a super magnificent concert. Aliènette has got a very amazing voice,” he said.

Aliènette performed a balanced set of English, French and OPM songs with great sensitivity. World-renowned pianist John Florencio accompanied her on the piano. She also interpreted French songs popularized by Edith Piaf and others. Piaf’s “La Vie En Rose” (Life in Rosy Hues) is the song that made Aliènette interested in the French language, which she learned online with friends in just three years.

The organizers of the show, mostly leaders of different Filipino associations in France, believe that bringing Aliènette back to Paris for a concert was like planting a good seed.

The unprecedented votes for singer from Iloilo landed her in 3rd Place in the competition. Her performance gave Filipino in  France a hopeful time. “That’s why we brought her back here to sing for our kababayans, touch our lives, share her optimism and most of all, for Aliènette to inspire all of us here. It is always and without fail that in her every performance, she leaves everyone in awe,” said one of the organizers.

Marjorie Renner, one of the major sponsors of the concert,  says, “As an artist, I would personally like to see her continue to build her singing career possibly as a song writer. But given her intelligence, I believe she would be also be a great advocate for various social causes in the Philippines.”

For John Florencio, playing for Aliènette was an unforgettable experience. “I have learned through the short rehearsal process that I have to be sensitive and supportive of her breath and phrasing, and that I have to be very specific in bringing out certain elements in the piano (dynamics, tempo and key changes) since she doesn’t have a visual reference,” he said.

According to him, despite Aliènette’s inability to see, she was very easy to work with and is a natural born musician.

“She has a way of treating the songs like we’ve never heard it before; it always sounds fresh. Aliènette has a very developed musical ear, very sensitive to harmony, melody and rhythm, at the same time her ability to lift the words off the page, making them live, is truly special. She’s an amazing artist,” Florencio added.

Aliènette has left a very special mark in John’s heart and he is looking forward to perform with her again and be part of Aliènette’s singing journey in the future. 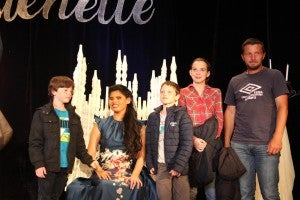 The Rogere family drove all the way from Lyons to see and hear Alienette in her Paris concert. CONTRIBUTED

Dressed elegantly with a blue-green floral-embroidered gown by Ronaldo Arnaldo, Aliènette felt good to be “home” and finally singing to the people whom she believes have brought her to where she is now. France has always been part of her dreams, which she realized when she qualified for “La France a Un Incroyable Talent.”  She loves France and everything that goes with it: the music, the language and the people.

“Aliènette Live in Paris” is part of the dream I am living in now,” says Katchry. “I’ve always said, music is my life and that I sing to live and I live to sing. I am so thankful to the people who made this concert possible. I am so happy that I was able to come back here in Paris, this time around to sing for my kababayans. I am so overwhelmed by their unending support since ‘Incroyable’”

Aliènette’s fans hope that she gets more recognition on the international scene, not just in France. Her success will inspire a lot of people with disabilities to follow their dream. It’s a strong message that needs to be heard.

Katchry was joined by her mother, Estrella San Felix Golbin. Both headed to Brussels, Belgium, for a short performance at the Philippine Embassy three days after her concert in Paris and a day before they flew back to Manila.

Marilyn Paed-Rayray is a Filipino based in France. She works as an editorial assistant for Barbara Chase-Riboud and is the founder of the Pinoy Heart and Caps for the Handicapped, Inc., a Filipino association in France that aims to give back to the host country (France) for its generosity to Filipinos.