PHNOM PENH—President Duterte arrived here on Wednesday to attend a World Economic Forum event as chair of the Association of Southeast Asian Nations (Asean) and as part of the Philippines’ efforts to catch up with the booming economies of its neighbors.

Mr. Duterte said he would be “articulating the interest of the 630 million Asean citizens” at the World Economic Forum on Asean, which will be attended by more than 700 business and government leaders from around the world.

He was to host a  briefing for foreign investors on his administration’s Build, Build, Build program.

Government officials leading the program, which aims to usher in the “golden age of infrastructure” for the Philippines, said it would need around $160 billion in funding.

“It will be the first launch internationally of the Build, Build, Build program, otherwise known as Dutertenomics and announcing it to investors, as well as to the international media,” said Manuel Teehankee, foreign undersecretary for international economic relations.

Teehankee said the thrust for more infrastructure projects was a way for the Philippines to match its neighbors’ economic gains.

“The Philippines is indeed wanting to play catch-up [by] improving [its] infrastructure,” he said.

Teehankee said Mr. Duterte and other heads of state would meet with two groups of businessmen.

The first one is a group of 25 businessmen, with whom the  heads of state will discuss youth, technology and economic development, he said.

The second group is composed of regional investors, whom the Asean leaders will consult on the improvement of strategies for good government and economic growth, he said.

Among the leaders expected to attend the meetings are regional executives from GE, Siemens, Cisco and Standard Chartered Bank.

As this year’s chair of Asean, Mr. Duterte will report on the achievements of the 30th Asean summit held in Manila last month.

Asean, celebrating its 50th anniversary this year, has been pushing for an integrated economic community similar to the European Union. Its success or failure is one of the topics of discussions during the forum.

This is the first time for Cambodia to play host to the World Economic Forum on Asean.

Cambodia, which has close trade relations with China, is one of the fastest growing economies in Asia. 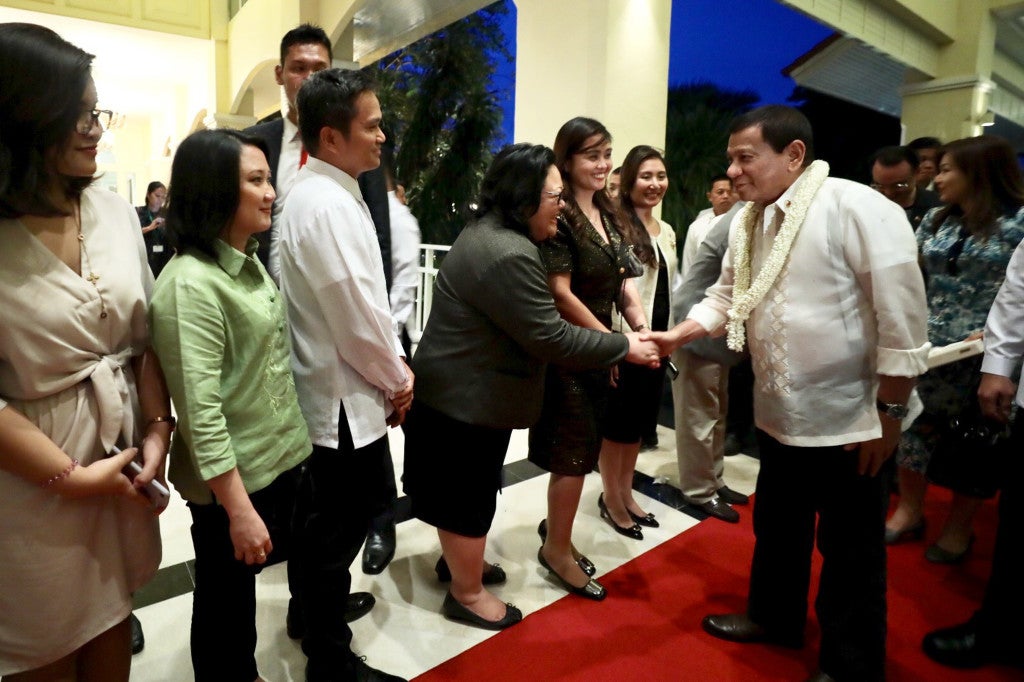 President Rodrigo Roa Duterte gets a warm welcome from officers of the Department of Foreign Affairs upon his arrival at the Presidential hotel in Phnom Penh, Cambodia on May 10, 2017. The President is scheduled to attend the World Economic Forum (WEF) on ASEAN 2017 on May 11. PRESIDENTIAL PHOTO

Read Next
‘Incroyable’ Aliènette Coldfire returns to Paris with a concert
EDITORS' PICK
Can Your Brand of Meat Be Trusted? Here’s How to Know You’re Eating Safe Meat
Can travel make you fall in love?
Xi’s early involvement in virus outbreak raises questions
COVID-19 has infected more than 69,000 people globally
COVID-19 screening checkpoints remain for those going to Boracay
The Najima Drive: Nissan’s MD drives #GoAnywhere adventures in new video series
MOST READ
WATCH: Sarah Geronimo dances ‘fierce’ version of ‘Tala’
Xi’s early involvement in virus outbreak raises questions
2,000 iPhones given for free by Japanese gov’t to passengers stuck on ship due to coronavirus
James Deakin visits injured student rammed by jeepney in Makati
Don't miss out on the latest news and information.