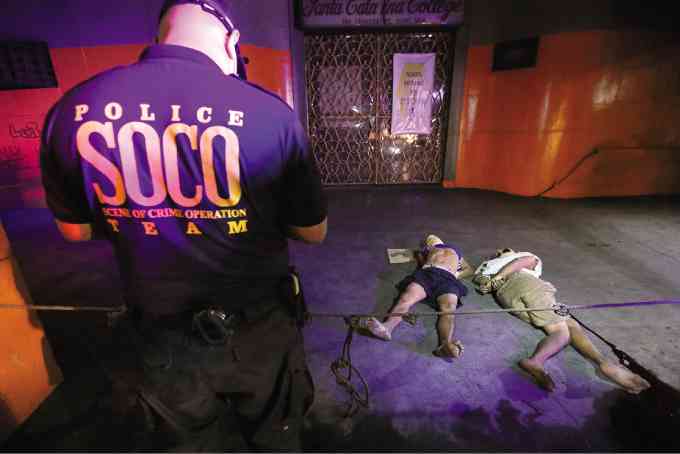 A crime scene investigator of the Metro Manila police inspect the bodies of two men linked to illegal drugs and were found dumped on the streets of the metropolis. (FILE PHOTO BY RAFFY LERMA / INQUIRER)

MANILA — Leftist groups have sent a team to Geneva to drum up awareness of reported extrajudicial killings in the Philippines even as the United Nations Human Rights Council reviews the country’s human rights situation.

The group will observe the UN proceeding on May 8, meet with European church groups and organize public events with the Filipino community in Switzerland and other parts of Europe.

At the same time, leftist groups will hold a noise barrage at the Mendiola Bridge close to Malacañang as part of their campaign against extrajudicial killings and for the continuation of the peace talks with the National Democratic Front.

Bro. Ciriaco Santiago, convenor of the church-based network Rise Up and a member of the team sent to Geneva, said they would submit documents on five cases of drug-related killings involving 13 victims in Metro Manila to the office of the special rapporteur on extrajudicial, summary or arbitrary executions Agnes Callamard.

“Even before (President) Duterte took office, Rise Up has observed an upswing in drug-related killings. President Duterte, however, has taken the killings to new heights, unabashedly justifying botched police operations and coddling abusive perpetrators,” Santiago said.

The other members of the group who arrived in Geneva last May 4 are lawyer Ephraim Cortez of the National Union of People’s Lawyers, Jigs Clamor of Karapatan, Sharon Cabusao-Silva of Gabriela.

Also part of the team are Nardy Sabino of the Promotion of Church People’s Response, Pastor Jerome Baris of the United Church of Christ in the Philippines, Jojo Guan of the Center for Women’s Resources, Pia Malayao of Katribu and Beverly Longid of the Rural Missionaries of the Philippines-Northern Mindanao region.

In their meetings and presentations, the group will campaign against all extrajudicial killings, including political killings, enforced disappearances, illegal arrests and detention, torture and harassment; as well as against the counter-insurgency campaign.

The group will also campaign for the unconditional release of all political prisoners and the continuation of the peace negotiations with the communist National Democratic Front and Muslim rebel groups in Mindanao.  SFM