Callamard: War on drugs doesn’t work in any country 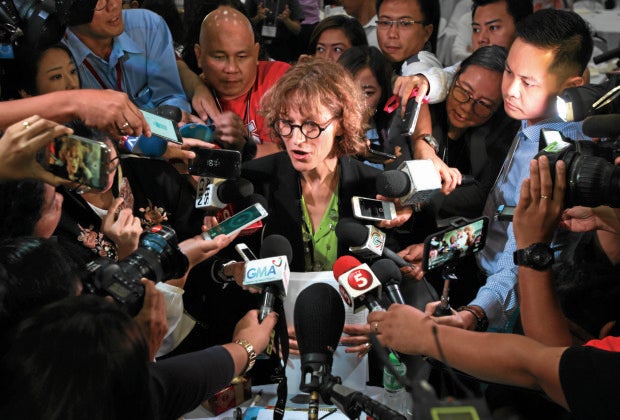 In an oblique swipe at the Philippine government on Friday,  United Nations Special Rapporteur Agnes Callamard said global experts have agreed that a “war on drugs” launched by any country was bound to fail.

“In April 2016, the general assembly of the world’s government recognized explicitly that the ‘war on drugs’—be it community based, national or global—does not work,” Callamard said at the start of the two-day “Drug Issues, Different Perspective” forum at the University of the Philippines.  “And further, that many harms associated with drugs are not caused by drugs, but by the negative impacts of badly thought out drug policies.”

Poorly conceived policies, she said, escalate problems including extrajudicial killings, slayings by criminal gangs, vigilante crimes, detention in rehabilitation centers without trial or evaluation and the breakdown of the rule of law.

“Badly thought out, ill-conceived drug policies can foster a regime of impunity infecting the whole justice sector and reaching into whole societies, invigorating the rule of violence rather than of law; eroding public trust in public institutions; breeding fear and leading people to despair,” Callamard said.

“These are the findings from research undertaken around the world.  Let me be clear. In none of the countries where the perverse consequences of ill-thought out drug policies were reported, in none of these countries did the drug problem disappear. In fact, the opposite happened,” she said.

“They did not suggest that death penalty was an appropriate or effective response to drugs trafficking, let alone drug use; instead, they spoke about proportionate sentencing and alternative punishments,” Callamard said.

The conference was organized by the Free Legal Assistance Group (FLAG) Anti-Death Penalty Task Force, the UP-Diliman Office of the Chancellor, and the UP College of Law Institute of Human Rights.

The government was apparently caught off guard by Callamard’s unannounced trip, and said it would lodge a protest with the United Nations because she had not organized the visit through official channels.

Callamard has criticized the drug war, putting the Palace on the defensive and earning the ire of the President.

Mr. Duterte last year said he would allow Callamard to carry out her investigation, subject to conditions, including a public debate. That condition was rejected by the UN official.

In her speech on Friday, Callamard pointed out that the UN’s joint commitment in addressing the worldwide drug problem “called for what amounts to a balanced, multi-faceted, multi-disciplinary approach, and they placed great emphasis on health, rights and justice.”

Callamard said the conference served as venue “to learn from experts here and from abroad, those who have long considered, studied and analyzed drug policies, their impact and effectiveness.”

Collins said the Philippine drug war “does feel like a slightly manufactured crisis.”

“What you need to look at is, ‘What was the necessity of the war on drugs?’” he said. “There’s a perception that this is at a crisis point, and there has to be severe action. But based on the data, the Philippines is probably below average in terms of consumption rates.”

Callamard said she had closely followed the Philippines the past months, coming to a conclusion that all are saying that “there are other ways” at addressing the problem.

FLAG head Jose Manuel Diokno said Mr. Duterte’s campaign has been devastating, especially for the poor, who have been the majority of victims.

“There is going to be a long-lasting impact of this war on drugs,” he said. “Whenever people are encouraged to take the law into their own hands it’s not just lives that are lost but the legal system itself is losing its meaning and value in our society.”

Reacting to the Palace statement questioning her presence here, Callamard said on Friday that she did not travel to Manila to conduct a UN investigation  but that she was merely taking part in the academic forum.

The police have reported killing 2,692 people in antidrug operations. They say unspecified parties have murdered another 1,847 people in drug-related incidents, while 5,691 other violent deaths were under investigation. —WITH REPORTS FROM AFP AND AP