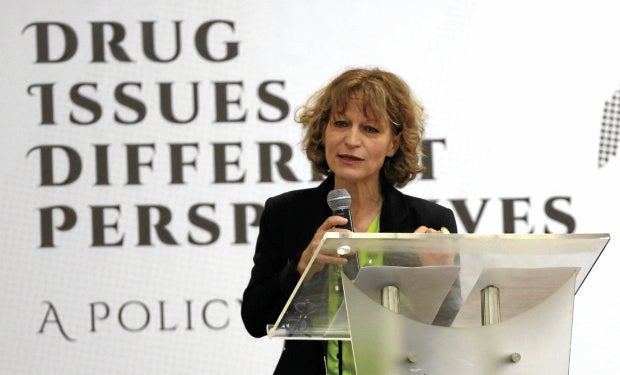 In a forum held on Friday at the University of the Philippines in Diliman, Quezon City, UN Special Rapporteur Agnes Callamard warns that a war on drugs launched by any government is bound to fail. —NIÑO JESUS ORBETA

The United Nations’ special rapporteur on extrajudicial killings, Agnes Callamard, circumvented official protocols when she came to the Philippines without first notifying the government, Malacañang said on Friday as it questioned her objectivity in looking at the country’s war on drugs.

Presidential spokesperson Ernesto Abella said the administration had asked the country’s representatives at the UN to take up the issue of the unannounced visit with their counterparts. He noted that Callamard’s trip was timed to coincide with a periodic review of the UN’s Human Rights Council in Geneva, where a senior-level Filipino delegation was expected on Monday.

The Philippine delegation will raise the matter of Callamard’s Philippine trip during their visit there, Abella said.

The Commission on Human Rights earlier said Callamard was not in Manila to investigate extrajudicial killings.

Callamard said she was just invited to speak in an academic forum on illegal drugs.

“We are aware that Dr. Callamard is currently in the Philippines and we are disappointed that, in not contacting the government in advance of this visit, she has sent a clear signal that she is not interested in getting an objective perspective on the issues that are the focus of her responsibility,” Abella said.

He said that in September the government sent a letter of invitation to Callamard “to get our perspective on the drug menace confronting our country” and what was being done to counter it.

“The fact that Dr. Callamard did not respond to our invitation showed that she would not be approaching her review of allegations concerning our country objectively or comprehensively,” Abella said.

Callamard’s manner of arrival supported this assessment, he further said.

“Our position is very clear, if Dr. Callamard is committed to ensuring due process to our government and a truly objective assessment of our record on an issue of tremendous importance to our nation, she should be in Geneva meeting with our representatives,” he stressed.

The administration had imposed conditions on Callamard’s invitation, including a public debate with President Duterte.

But Callamard had urged the government to lift the conditions, arguing that these would run counter to the terms of reference and code of conduct for rapporteurs. The Department of Foreign Affairs has insisted on the conditions.

The invitation to the special rapporteur showed that the government respected her as a professional and wanted her to see the situation on the ground first hand, as well as trade views with officials to understand the government’s position on the issue of human rights and the country’s progress, Abella said.

“Her actions, since then, and the circumstances surrounding her current visit, have made it clear that Dr. Callamard is not approaching her assignment professionally or objectively,” he said.

The presidential legal counsel, Salvador Panelo, said Callamard’s conclusion was “hearsay” that was arrived at after reading reports and watching videos about the drug war.

“What I’m questioning is the basis of her conclusion, which is based on hearsay and some reports coming from whoever and wherever,” Panelo said. “It’s not an independent study, it’s not objective study, it’s just a conclusion on the basis of things she heard.”

He said he did not think Callamard could conduct an impartial investigation after Friday’s incident.