Kelly: PH needs to worry only about falling rocket debris 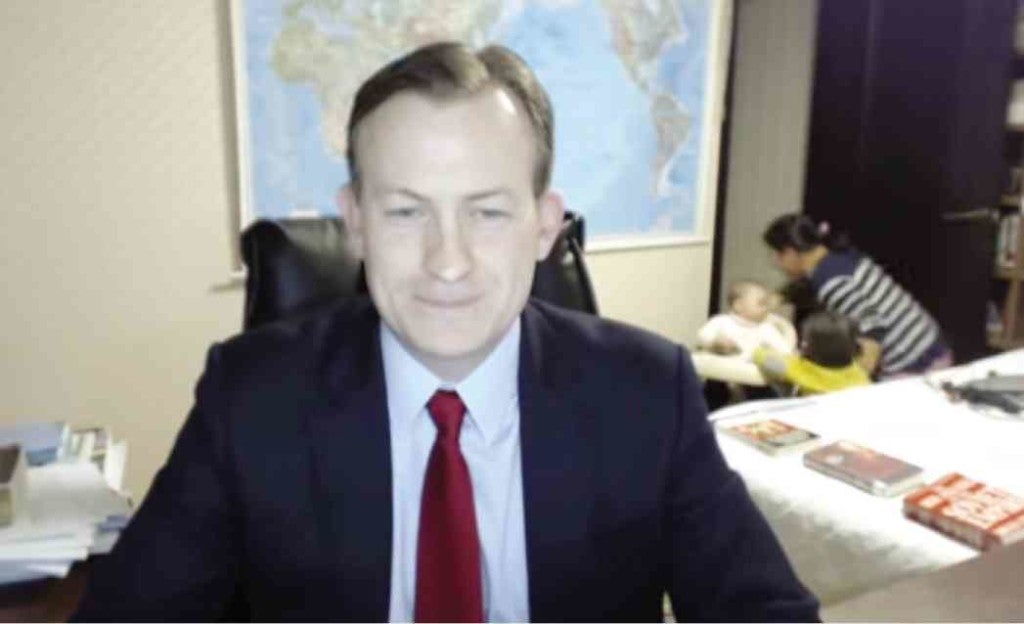 Robert Kelly and his wife and children in a screengrab of a video interview on March 10 that has now gone viral. —bbc/YOUTUBE

While tension between the United States and North Korea escalates over nuclear weapons, Filipinos should be worried only about Pyongyang’s missiles that would fly through their skies, Northeast Asia security expert Robert Kelly said on Friday.

In a lecture at Ateneo de Manila University on regional security and the political crisis in South Korea, Kelly said dealing with rocket debris might be the only way the Philippines, which sent a military contingent to the Korean War in the 1950s, could get involved in the conflict on the Korean peninsula at this time.

“The Philippines is far from the main theater of action,” he said. “The real concern is that you are in a test flight path, which is disturbing.”

He said that when Pyongyang test-launched short-range ballistic missiles in 2012, stirring anxiety in the region, the government under then President Benigno Aquino III worried about rocket debris falling on its territory.

“The way the Philippines would get sucked in is with the rocket testing, but with most of (North Korea’s) tests, these are short-range [missiles],” Kelly said, noting that most of Pyongyang’s rockets had headed east toward Japan.

“But if North Koreans would build an intercontinental ballistic missile, they would have to test it and that would go thousands of miles,” said the political science professor from Pusan National University in South Korea.

“If they fly it over Japan, they risk serious Japanese retaliation. So they may fly it over the south, then it flies near the Philippines. That’s the thing I would be concerned about,” he added.

He said Pyongyang would “not even care” if parts of their rockets fall on Philippine territory. “They don’t care about this stuff,” he said.

Yet, despite the rising tension between Washington and Pyongyang, Kelly said it is unlikely that war would erupt soon.

He said, however, that US President Donald Trump’s administration has been causing a lot of anxiety and confusion.

“Normally, when war scares happen, the American government is the pillar of predictability and stability,” he said. “Under the Trump administration, there’s a lot more uncertainty.”

However, he doesn’t expect Trump to order a strike against North Korea anytime soon.

“He can talk that way, but the constraints are too severe,” Kelly said, citing North Korea’s decades of “tunneling” as defense against airstrikes and South Korea, a staunch US ally, being too close to a possible battlefield.

It was “correct” for the Trump administration to call on members of the Association of Southeast Asian Nations to help cut funding to North Korea.

“Cutting off the diplomatic relationships of North Korea is the best way to go … a way of pressuring North Korea without the risks of bombing,” he said.

The totalitarian state under Kim Jong-un “cannot stand on its own,” and China, African and Southeast Asian nations funneling resources to Pyongyang should “pull the plug,” he said.

President Duterte recently spoke with Chinese President Xi Jinping on the North Korean crisis, allegedly at the behest of Trump. Beijing is a close ally of Pyongyang.

The security expert based in South Korea gained immense popularity after his two children innocently crashed his live television interview in March. It also showed his wife frantically trying to get the two out of the room that served as his home office.

The viral video had plunged the Kelly family into sudden fame, particularly his 4-year-old daughter, Marion, and 1-year-old son, James.

Before starting his lecture attended by 500 mostly students and teachers, Kelly first dealt with what he referred to as a “legitimate family blooper.”

“I’m still struggling with what I think about the video,” he said. “No, it wasn’t staged … I forgot to lock the door. That’s the only reason.”