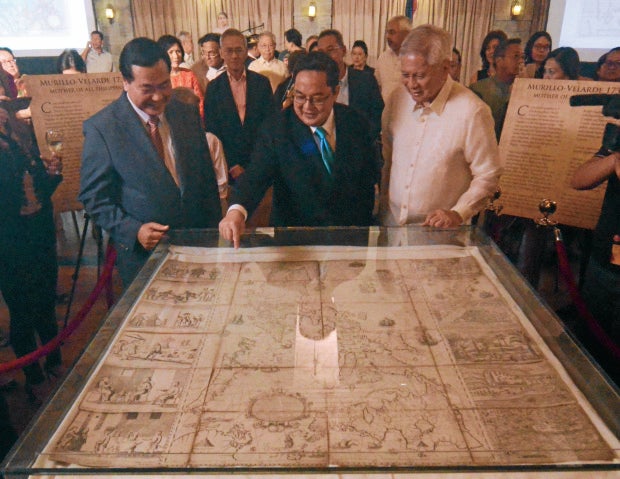 Supreme Court Senior Associate Justice Antonio Carpio has launched a book that says China’s claims to virtually the entire South China Sea are baseless and said he would make an electronic copy in Mandarin available on the internet so it could be accessible to the Chinese people.

Carpio said public opinion, including in China, could pressure Beijing to comply with last year’s arbitral ruling that invalidated China’s historic claims in favor of the Philippines based on the 1982 UN Convention on the Law of the Sea.

With Carpio’s help, Manila filed a case challenging Beijing’s nine-dash-line claim in the South China Sea at the International Arbitral Tribunal in The Hague. Beijing refuses to accept the ruling and continues to develop seven artificial islands in the Spratlys archipelago.

“This book in its printed form can never be distributed in China. It will be banned,” Carpio said at the book launch at Manila Polo Club on Thursday.

Carpio said the book aims to inform Filipinos about the extent of their maritime areas and natural resources. It will also tell other coastal states that it is in their national interest to help the Philippines protect its maritime entitlements.

Finally, he wants to convince the Chinese people that their government’s extensive maritime claims have no legal or historical basis.

The electronic version of the book, titled “The South China Sea Dispute: Philippine Sovereign Rights and Jurisdiction in the West Philippine Sea,” would also be available in Vietnamese, Bahasa Indonesia, Japanese and Spanish.

The Mandarin version could be released before the end of the year, Carpio said.

“Once the Chinese people realize the falsity of the nine-dash line, they themselves will be too ashamed to press the nine-dash-line claim before the world. That will be the time that the Chinese government can comply with the ruling of the arbitral tribunal,” he said.

Carpio said in his book that China wants all the fishery, oil, gas, and mineral resources in the area it claims for itself and to establish a sanctuary for its nuclear-armed submarines that would be free from US surveillance.

He warns in the book that China may be planning to build outposts at Luconia Shoal off Malaysia and Panatag (Scarborough) Shoal off the northwestern Philippines.

Such a base on Panatag would give China enough radar coverage of the South China Sea that would enable it to impose an air-defense identification zone similar to what it did a few years ago in the East Sea region where it has territorial rifts with Japan, he said.

China and the Philippines, along with Brunei, Malaysia, Vietnam and Taiwan have overlapping claims to parts or all of the South China Sea that straddle busy sea-lanes and are believed to be atop undersea deposits of oil and gas.

Former Foreign Secretary Albert del Rosario said China was building a “Berlin Wall of the Sea” that excluded everyone else and had prevented the Philippines from exploring and exploiting areas where it had rights according to the arbitral ruling.

He praised Carpio for promoting the rule of law as “the great equalizer,” which had worked well for a small country against a superpower.

The arbitral ruling provided the Philippines with the protection of “a durable, rules-based solution” to disputes among nations, Del Rosario said.

“It must be realized that we cannot weaken that protection by picking and choosing when to promote the law and when to ignore it. By obligation, through our leadership and with the support of the responsible community of nations, we must instead ensure that the whole of the rules-based system succeeds,” Del Rosario said in an apparent swipe at President Duterte.

The President, who has eased Manila-Beijing ties that were strained by the arbitration case, has declared he will eventually raise the ruling with China’s leaders, but has been vague on when.

A 283-year-old map that purportedly established Philippine-owned portions of the disputed waters was also unveiled at the book launch.

Businessman Mel Velasco Velarde acquired the map at an auction by Sotheby’s London of 80 heirlooms owned by the Duke of Northumberland Ralph George Algernon Percy.

He donated the map to Philippines and it will be formally turned over to President Duterte on June 12 during the Independence Day celebration. —WITH A REPORT FROM AP