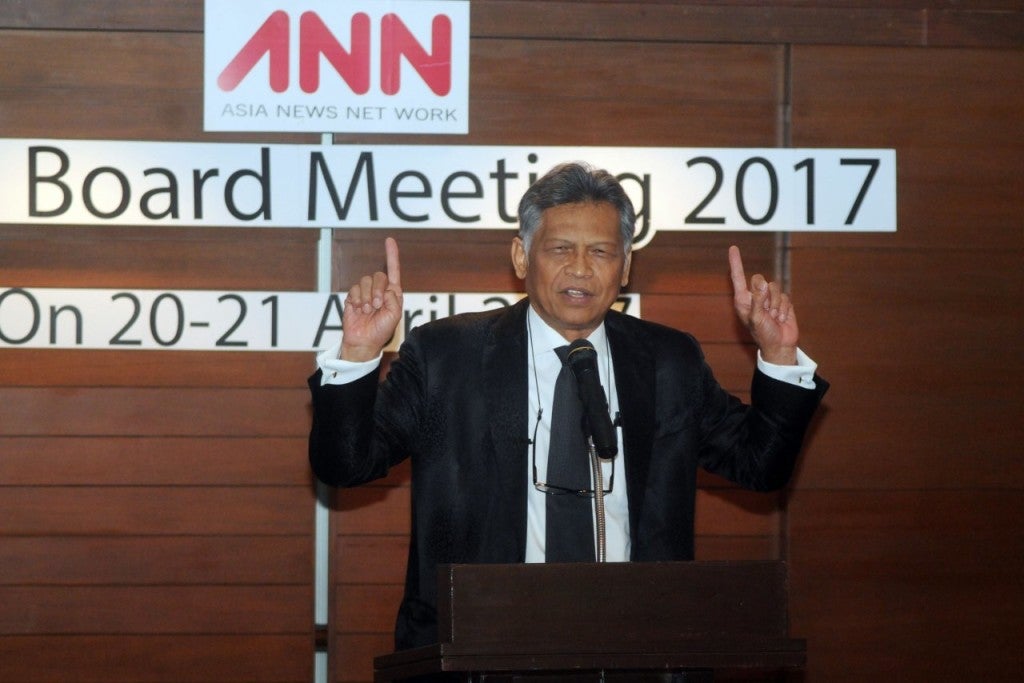 The Association of Southeast Asian Nations (Asean) needs to be more integrated and stronger to cope with the changing global landscape, as “multilateralism” was in decline, former Asean chief Surin Pitsuwan said, calling on the regional grouping to enhance the role of the Asean Regional Forum (ARF) to solve the crisis in the Korean Peninsula.

The secretive communist state North Korea was included as a member of the ARF in 2000 when Surin was the foreign minister of Thailand, which then chaired Asean, to engage with the international forum.

All of the members of the now dormant six-party talks to tackle Pyongyang’s nuclear ambitions are in the ARF, but after the problem in the Korean Peninsula erupted there was no mention of the ARF, he said.

“The ARF should take on bigger tasks and more critical issues, not just sit together and discuss natural disasters. It should face up to issues, and confront problems critical for the region,” Surin told a meeting of editors from the Asia News Network (ANN) in Bangkok on Thursday.

The Korean Peninsula has become a hot topic after Pyongyang conducted a missile test and the US administration under President Donald Trump warned of a strong response.

“My assumption is that North Korea is not going to make concessions to anybody – US, China or Japan – but it could give some signal to the ARF,” he said.

China, which is on relatively good terms with the leadership in Pyongyang, should put more effort into a peaceful solution with North Korea, he said.

The landscape of international relations is fast changing. Multilateralism, which has been the main theme since the late 20th century, is weakening while unilateralism – which means power plays, rather than rules and institutions – is about to dominate the world order, he said.

In order to cope with the new global trend, Asean needed to be more integrated and strengthen its institutions and mechanisms, he said.

“We need to create our own market, our own integration and our own platform because all over the world, everybody is setting up new regulations,” he said.

“And we need India, China and other South Asian countries as well as other small countries involved in the future because the rules of the game are going change,” he said.

While Asean needed China to be a partner, Surin said he doubted whether Asean was capable of dealing with its giant neighbor, especially when faced with serious issues like the contentious South China Sea.

“Asean has been enthusiastic to welcome China into the club. Asean was lured by the notion of a peaceful China but Beijing became more proactive and started to project its power and influence in the region,” he said.

Previously, Beijing regarded the contentious sea issue as between Asean and China but as it grew in power, China said it wanted to deal with the issue on a bilateral basis, Surin said.

READ: Asean hopes up on code of conduct

“Asean needs to be united, to read the signs carefully,” he said. “The fact that China did not respond aggressively to the Permanent Court of Arbitration ruling last year is a good sign, but since the Philippines wanted Asean to stay behind, that put Asean in an awkward position.

“Asean needs more unity in managing this issue with China as an Asean issue, rather than as a bilateral issue for individual countries.”

Surin expressed concern that Asean currently lacked strong and visionary leadership to lead the regional grouping in coping with the new challenges.

“I don’t think democracy has served Asean well. Asean has reached this point not because of democratic leadership,” he said.

“There were strongmen like Mahathir Mohamad of Malaysia, Lee Kuan Yew of Singapore, Suharto of Indonesia, Ferdinand Marcos of the Philippines and Prem Tinsulanonda of Thailand who led Asean during trouble times in the late 20th century to the successful position these days.”

Former Thai prime minister Thaksin Shinawatra had the potential to be a strong and visionary leader of Asean, but he failed because he was in too much of a hurry, Surin said.

He said a strong leader, however, should be cultivated within the framework of the law, noting that he himself came to power through an election.

Democracy can produce strong leadership since leaders have to tolerate criticism and opposition, he said.

“I hope that we can grow to accept the fact that in a democracy, you cannot avoid divergences of opinion. You have to live through it and suffer,” Surin said. “You would be in trouble if you try to silence your critics.”/rga