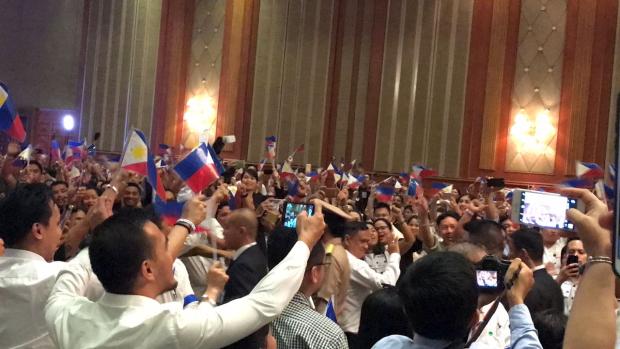 President Rodrigo Duterte gets a standing ovation from around 2 000 overseas Filipino workers in Bangkok during his meeting with the Filipino Community. (Photo by NESTOR CORRALES /INQUIRER.net)

(Updated, 3:58 p.m., March 25) BANGKOK— Working abroad may now only be an option for Filipinos in the next 10 years as President Rodrigo Duterte assured overseas Filipino workers that the government would be free of corruption so it could provide better job opportunities in the country.

With this vow, Duterte drew cheers from OFWs.

With millions of OFWs abroad, Duterte also assured them that their “balikbayan boxes” will be safe as he banned the Bureau of Customs from opening these.

“I have prohibited Customs magbukas-bukas ng bag (to open the bag). The usual excuse is search. Alam mo galing eroplano yan, magdaaan yan doon sa baba. Meron na pong x-ray doon. Eh kung may tinago ka na boyfriend mong binalot mo makikita na yun doon (You see, the boxes were unloaded from the airplane, passed the x-ray. If you hid, for example, your boyfriend in the box, it can be detected),” he said, eliciting laughter from the crowd.

The President compared how politicians were accorded privileges but ordinary people were being treated unfairly.

(Congressmen, mayors will get a salute from customs personnel. But ordinary people will be thoroughly inspected and they could lose some items from their baggage.)

In the past, OFWs have complained of missing items from their balikbayan boxes amid reports that the BoC conducted unnecessary opening of their boxes.

Duterte urged OFWs to assert their rights and drop his name if customs men would insist opening their boxes.

The President also vowed to make life easier for OFWs who are securing permits and government documents.

(Processing of permits will be completed in three days. Maybe by the time you come home, your transactions with the BIR may be done through text or other transactions maybe done online. You do not have to fall in line anymore.)

Duterte also said he no longer wanted to see Filipinos queuing, especially OFWs, at government agencies to get requirements for overseas work.

(I told labor and overseas officials that I do not want Filipinos queueing. I instructed them to do something about transactions that will require Filipinos to fall in line.)

To make it easier for OFWs securing documents, he also wanted that satellite building of the Bureau of Internal Revenue, the National Bureau of Investigation and other related agencies to be stationed within the Philippine Overseas Employment Administration (POEA) to spare OFWs the hassle.

(I have ordered the overseas and seafarer agencies to implement strategies that will make your lives easier. You don’t have to travel far from the Overseas building anymore. When you go out, there will already be BIR and NBI kiosks.)

The OFW from Sorsogon, who has been in Thailand for 15 years, expressed his frustration over POEA every time he returns home to the Philippines.

“Minsan nasasabi namin wala kaming napapala diyan e nagbabayad kami. Pero ngayon sa narinig namin na ganun may nakikita kaming liwanag (Sometimes, we feel like we are not getting what we paid for. But now, with his pronouncements, our hopes are renewed),” he said.

Roy Aristotle Soriano, who has worked here as a social studies teacher for 16 years, described Duterte as “one of a kind.”

(It’s rare you get a president like that. So I really grabbed this opportunity to see him and hear what he has to say.)

Asked about criticisms on Duterte for his brutal war on drugs, he said the President always had the country in mind.

Phylis Clomata, an English teacher here, was also happy with the President’s promise.

Clomata was a former teacher at the Mlang National High School in Cotabao before she decided to work here as a teacher.

In terms of compensation, she said her salary was “doubled” compared to the one she was earning in the Philippines.

But she was hopeful working conditions in the country would improve with Duterte’s resolve for OFWs.

For 27-year old science teacher Adrian Flores, he said the promise of Duterte to make working abroad an option was the “best news” he heard from the President.

“It’s the best news that I could expect from him,” Flores said.

Amid criticisms against the President, Flores defended Duterte, saying he was trying his best to address the country’s problems.

“I know his trying his best though the job is very tough. I look forward that he will eventually achieve his goals for the Filipino people,” he said.

He said the President was only trying “to make sure that my home the PH will also be a safe and a progressive one.”

With Duterte’s promised of change for the Philippines, the science teacher said he looks forward to going back home and practicing his profession.

“Eventually in the end, I will settle at home,” he said.

He said the greatest problem the Philippines is facing is disunity of Filipinos.

“The problem with us today is we have to be united. I think Filipinos today is divided,” he said. IDL

Horses that survived eruption may end up in slaughterhouses