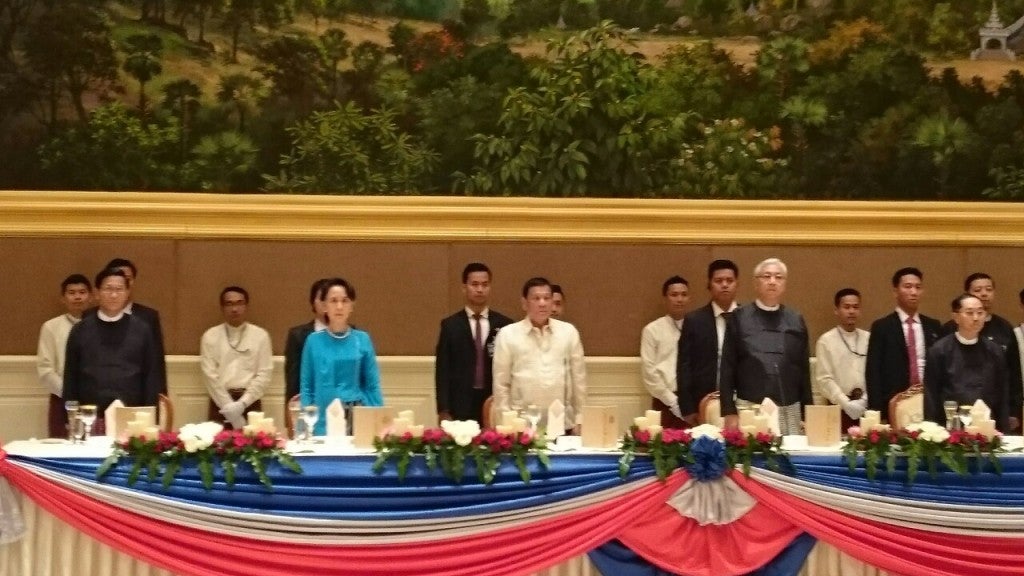 NAY PYI TAW, Burma (Myanmar)—The heads of state of the Philippines and Burma raised their glasses on Monday evening to “strong and deeper” ties between the two nations, on the last night of President Duterte’s first official visit to the country.

In toast remarks at the banquet hosted by Burma President Htin Kyaw for President Duterte in the Presidential Palace here, Duterte said the Philippines was aiming for increased cooperation in agriculture, labor and trade and investment.

“My visit demonstrates the commitment of my country to expand cooperation with Burma on a broad range of issues,” Duterte said, in his remarks.

“In defense and security, we must work closer to address the threats of terrorism and violent extremism that undermine the economic progress we have so far achieved,” Duterte said.

He also added: “We should be unrelenting in our fight to dismantle the apparatus of the illegal drug trade. This menace is a challenge that knows no borders and affects all of us in the region.” Among the Cabinet secretaries joining Duterte in the Burma trip were Defense Secretary Delfin Lorenzana, national security advisor Hermogenes Esperon, and Philippine Drug Enforcement Agency head Isidro Lapena.

In trade and investment, Duterte noted that Philippine businesses dealing with pharmaceuticals and food and beverages have already invested in Burma. “Philippine companies will remain keenly interested in the development potentials of [Burma], which is among the highest in the [southeast Asian] region,” Duterte said.

Burma, on the other hand, can avail itself of education, training, capacity building and human resource development opportunities in the Philippines, Duterte said.

The banquet was held after Duterte met with Htin Kyaw and Burma State Counsellor Aung San Suu Kyi at the Presidential Palace earlier in the day. Duterte had ended the meeting with Suu Kyi with the turnover of a symbolic check indicating the Philippines’ pledge of US$300,000 in humanitarian assistance to Burma’s Rakhine State.

The world-renowned democratic icon earlier issued a letter of appreciation, thanking the Philippine government for the “thoughtful gesture” which “reflects the Asean solidarity and family spirit, as well as the traditional bonds of friendship and cooperation between the two countries.”

“I thank you and the people of Myanmar for the timely assistance, particularly for those who were affected by typhoon ‘Pablo,’ which hit my island in Mindanao, the earthquake in Bohol, and the typhoon [Haiyan]. In our own modest way, please note that the Philippines is ready to support Myanmar in its own humanitarian challenges,” Duterte said, in his toast remarks.

For his part, President U Htin Kyaw described the afternoon’s bilateral talks with Duterte as being “open and cordial,” and “related to our existing cooperation and on plans for our future cooperation.”

“We are also very pleased to witness the signing of the Memorandum of Understanding on Food Security and Agricultural Cooperation between the two countries,” Htin Kyaw noted, in his toast remarks. “We strongly believe that we have ample opportunities to promote our bilateral cooperation, particularly in trade, investment, tourism, food processing, and agriculture, among others.”

Htin Kyaw said Burma was ready to cooperate with the Asean to “promote peace, stability and prosperity in the region and the world at large.”

The Philippines is also this year’s Asean chair and will be hosting the southeast Asian regional summit.

After the banquet, Duterte is scheduled to fly straight to Thailand, at around 8:30 p.m., Myanmar time (10 p.m. Manila time).