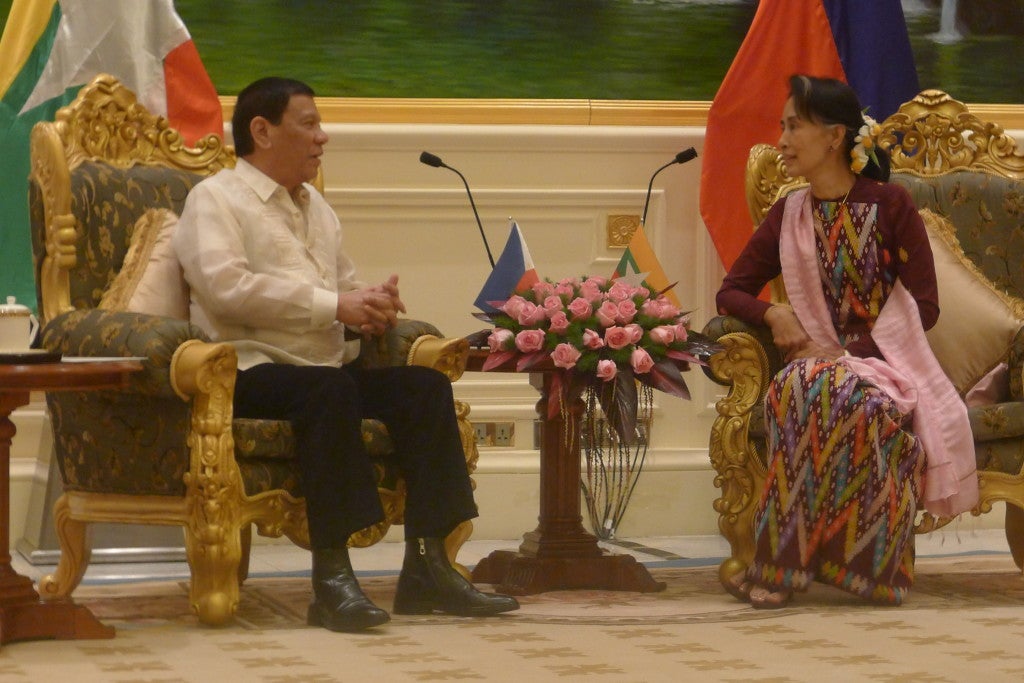 NAY PYI TAW, Burma – The Philippine government has pledged US$300,000 humanitarian assistance to Burma’s (Myanmar) Rakhine State – known internationally as a hotbed for religious violence between the Buddhist communities and the minority Rohingya Muslims.

The pledge was made official during President Duterte’s meeting with Burma President Htin Kyaw and state counsellor Aung San Suu Kyi at the President Palace here in the nation’s capital on Monday afternoon, the second and last day of Duterte’s first official visit to Burma.

Duterte began the closed-door meeting with Suu Kyi  by handing her a bouquet of roses, and had wrapped up the meeting by handing her a symbolic check representing the Philippines’ pledge for the assistance in Rakhine State.

The democratic icon and Nobel Prize awardee Suu Kyi, Burma’s de facto leader especially on international affairs, later issued a letter of appreciation, thanking the Philippine government for the “thoughtful gesture” which “reflects the Asean solidarity and family spirit, as well as the traditional bonds of friendship and cooperation between the two countries.”

Burma was the first to help the Philippines when the country was hit by Supertyphoon “Yolanda” in 2013.

The Philippines is also this year’s Asean chair and will be hosting the Southeast Asian regional meet.

According to the Department of Foreign Affairs, Duterte had particularly called for “increased two-way trade and investment, citing the growing presence of Philippine companies in Myanmar.” Htin Kyaw, for his part had requested transfer of technology, finance and management training, and capacity building; invited investors to Myanmar; and encouraged tour packages.

Earlier in the day, a group of Filipino companies which have offices in Burma paid a courtesy call to Duterte. Department of Trade and Industry Secretary Ramon Lopez, part of Duterte’s delegation in Burma, said there were more than 20 Filipino firms in the country.

“Our trading with Myanmar is still small – we’re just starting to trade again with Myanmar,” Lopez noted, in an interview. “Our relationship here is a bit of a start-up – but these are opportunities.” The Philippines’ major imports from Burma are agricultural products, while the Philippines’ top exports to Burma are medicaments for therapeutic or prophylactic uses.

The two Presidents had also overseen a signing ceremony of a memorandum of understanding on food security and agricultural cooperation.

Lopez said the Philippine government was eyeing Burma as a potential market for hybrid rice seed exports developed in the Philippines.

According to Cayetano, the leaders had also discussed “worldwide concerns on terrorism.”

A banquet was to be hosted by the Burmese officials for Duterte in the evening, right before Duterte leaves Burma and heads to Thailand for his two-day official visit in the neighboring southeast Asian country.