‘I’m not stupid; you are,’ Duterte tells Colombia’s Gaviria 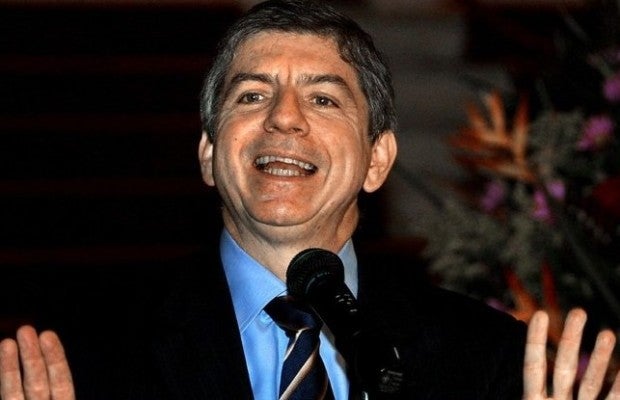 Former Colombian President Cesar Gaviria talks to journalists in this January 2004 photo. Gaviria is urging President Rodrigo Duterte to avoid the mistakes he committed when he waged a ‘heavy-handed’ war on drugs in his country. (Photo from AFP)

President Rodrigo Duterte isn’t done lashing out at former Colombia President Cesar Gaviria for cautioning him on his heavy-handed approach to the drug war, saying he was not “stupid” like him and would not commit the same mistakes he did.

“He must be stupid, this ex-President of Colombia [saying] Duterte is committing the same mistake. We cannot, never be on the same mistake because I am not stupid; you are,” Duterte said in a speech in a Davao City business forum, drawing laughter from the crowd.

“This former president is boasting that I am committing the same mistake,” he later added. “That is only possible, Mr. Ex-President, if I am as stupid as you, I said. But unfortunately, I am not.”

According to the Philippine President, Colombia was able to address the narcotics trade because the United Spent spent billions to help it, because that the South American country was the source of cocaine and heroin flooding the states.

With the billions from the US, “they practically bought every citizen there with money,” which was why the drug trade was stopped, Duterte said.

“What help did America give us, except to recommend for my prosecution in the international court of justice criminal court? They even want me jailed,” he added.

But the US was not even a member of the International Criminal Court, he pointed out.

In contrast, he said China was the first to provide a rehabilitation center in the Philippines that can house 10,000 drug users.

In a New York Times article, Gaviria had warned Duterte not to commit his same mistakes in trying to eliminate the drug scourge, saying that “throwing more soldiers and police at the drug users is not just a waste of money but can actually make the problem worse.”

But Duterte had not taken kindly to the advice, calling Gaviria an “idiot” on Thursday.

He had also said their countries were differently situated, as Colombia had faced a cocaine problem while the Philippines had shabu (metamphetamine hydrochloride), which he claimed was more harmful as it would addle the brain.

Duterte’s drug war has courted controversy, with groups expressing concern over the killings of some 7,000 drug suspects in police operations or in vigilante-style killings

Meanwhile, Duterte also spoke once more of his health concerns and his own drug use – not the illegal kind, but the strong painkiller fentanyl that used to be prescribed by his doctor and which had left him on “cloud nine.”

According to him, his spinal injury from an accident has him “perpetually in pain.”

He had been prescribed fentanyl in the past, but he said his doctor got mad at him for using the whole patch at one time when he was supposed to cut it into four pieces.

“There was a time that I used the whole thing because, more than just the disappearance of pain, you feel that you are on cloud nine, as if everything is OK with the world, nothing to worry about,” he said.

But he decided to take his doctor’s advice after the latter warned him to look for a new physician if he would disobey instructions.

He said he learned to bear the pain and his threshold for pain was raised.

Sometimes, the scale of his pain rises to four, but all he needed was just a few minutes of sleep and it gets better, he added.

He also joked on Friday that his pain was at level seven, but it went down to almost zero when he saw beautiful women. /atm