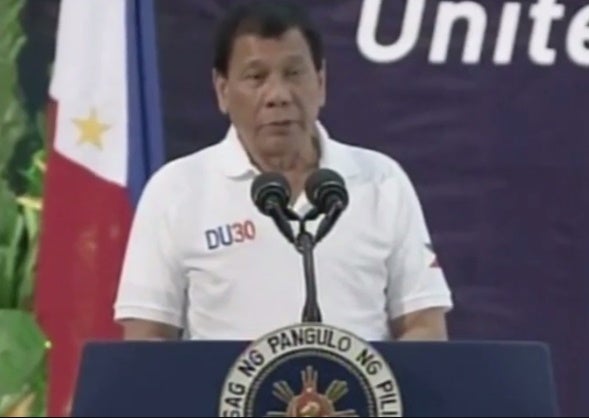 President Rodrigo Duterte lashed out on Wednesday at former Colombian President Cesar Gaviria and called him an “idiot” for criticizing his brutal war on drugs.

“Colombia has been lecturing me, that idiot,” Duterte said in a speech at the 115th anniversary of the Bureau of Customs, referring to Gaviria.

In an opinion piece published on the New York Times, Gaviria told Duterte that “the drug menace cannot be solved by the “heavy-handed” approach of killing drug addicts.”

He said he was hoping that Duterte would not commit the same mistakes that he did in dealing with Colombia’s drug problem.

“We respect the opinion of former President Cesar Gaviria that Colombia’s experience of ‘war against drugs’ cannot be won by the armed forces and law enforcement agencies alone,” Abella said.

“The Philippine President rightly understood the same insight when he began to address not just crime and illegal drugs but also broadened government efforts into a public health issue,” he added.

The Palace official said “the second phase of the President’s anti-drug campaign focuses on the treatment and rehabilitation of drug dependents.”

“More than a national security problem, the proliferation of drugs in the country has been regarded as a health pandemic,” he said.

“It is unfortunate that international attention to the drug war in the Philippines centers on drug-related killings rather than the breakthroughs of the campaign.  However, we appreciate the ex-Colombian president’s concerns and we encourage our people to see our situation in the light of comprehensive nation-building,” he said. CDG/JE

Read Next
Filipino seafarer dies on North Africa-bound ship—report
EDITORS' PICK
The Najima Drive: Nissan’s MD drives #GoAnywhere adventures in new video series
Can Your Brand of Meat Be Trusted? Here’s How to Know You’re Eating Safe Meat
Can travel make you fall in love?
Xi’s early involvement in virus outbreak raises questions
COVID-19 screening checkpoints remain for those going to Boracay
COVID-19 has infected more than 69,000 people globally
MOST READ
2,000 iPhones given for free by Japanese gov’t to passengers stuck on ship due to coronavirus
WATCH: Sarah Geronimo dances ‘fierce’ version of ‘Tala’
COVID-19 has infected more than 69,000 people globally
NBA loses ‘hundreds of millions’ in China over Hong Kong tweet
Don't miss out on the latest news and information.