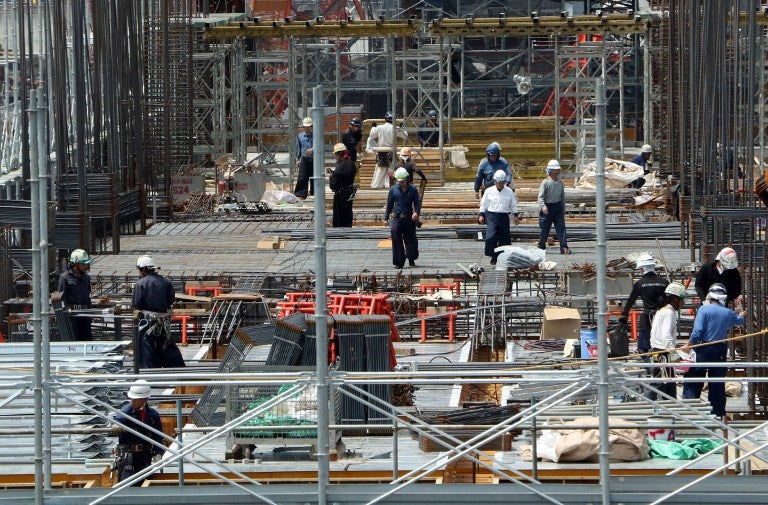 Construction workers labor at a large building in Tokyo on May 20, 2015. Japan said the number of foreign workers in the country had surpassed the 1 million mark in 2016. It said Chinese workers led the group followed by Vietnamese and then by Filipinos. AFP

TOKYO, Japan — The number of foreign workers in Japan topped 1 million for the first time last year, the government has said, as the country looks overseas to offset labor shortages.

Tokyo has moved little on loosening strict rules for foreign workers despite years of calls to crack open Japan’s borders to more immigrants.

But Prime Minister Shinzo Abe has unveiled a plan to review the rules, saying foreign labour will increasingly be needed, particularly in the booming construction industry ahead of the Tokyo Olympics 2020.

A record 1,083,769 foreigners were working in the country at the end of October, up 19.4 percent from a year earlier, the labour and welfare ministry said on Friday.

The number of Chinese workers, topping the foreign labour list, gained 6.9 percent to some 345,000, accounting for nearly one third of the total, it said.

The ministry said the jump largely reflected an increase in the number of foreign students and highly skilled workers.

Rapidly-ageing Japan is desperately short of workers to pay the taxes to fund pensions and healthcare for its growing grey population, but it is almost constitutionally allergic to immigration, allowing only a small number of unskilled workers into the country.

The government has now decided to expand the country’s industrial training programs to allow foreign workers to stay five years instead of three.

Japan has also revised immigration law to accept more nurses and caregivers to work in the healthcare sector. CBB